It is fairly common to ask people about the cloud and see their negative reaction.

The truth is, nearly everyone uses cloud services and usually they aren’t even aware of it. In this article, we're going to bust a few myths about the cloud and instead show you what the benefits of using or moving your business into the cloud are.

Before we do a deep-dive into the myths and misconceptions of cloud storage, let’s define exactly what it is.

What is cloud storage?

Cloud storage is the service model where data is maintained, managed, and backed up remotely. It is available to users over a network, like the internet.

It’s common for businesses to be unsure of which cloud storage hardware to use. If you’re interested in using cloud storage, but are unsure where to start, check out this list, brought to you by G2!

Before you take advantage of cloud storage, let’s breakdown the myths, so you know exactly what to expect.

1. Cloud migration will require too much work

It’s easy to see why some people might think that first starting up on the cloud won’t be worth the time and effort that is required, especially when there likely are gigabytes or even petabytes of data to upload. It’s true that life was difficult for early adopters of cloud technologies, many of which were still unproven, and businesses had to figure everything out themselves.

However, the technology has significantly improved, and cloud solution providers are on hand with assistance every step of the way to provide information and help, right down to the technicalities: migration options, firewall configurations, identity options, and reverse proxy requirements, and so on. In most cases, existing tools and processes can be used to following several different existing migration pathways, making the job much easier than it may first appear, while cloud training is also readily available for developers and operations engineers.

Any size company can, and probably will, reap the many benefits and convenience of adopting cloud technology. Many small to medium-sized companies are signing up with major cloud providers nowadays because, quite simply, it makes perfect sense for them in financial terms. Significant computer systems are required to compete in modern business in today’s digital world, but small businesses often don’t have the upfront capital investment required to build a data center in-house. The cloud therefore enables even the smallest of enterprises to benefit from its technology to power their applications for example, without having to power, maintain and update their own data servers.

3. Moving to the cloud is all-or-nothing

Even those early supporters of the cloud who proclaimed it as the Holy Grail of Information Technology (IT), still never really advocated migrating the entire business in one fell swoop. The cost alone of doing so would be too intimidating a prospect for many, despite the known short and long term benefits. Cloud deployment can actually come in countless different shapes and sizes. It is much more common to adopt a hybrid approach to implementing cloud technology (with many starting by migrating a single area or just one application, such as email) at a time and going from there.

This hybrid cloud creates a consistent platform that simplifies IT while delivering data and apps to users located anywhere around the world, on practically any device. It is also important to remember that the cloud should not be used for everything, so it is certainly not a one-size-fits-all solution. The simple reality is that not all applications or processes are a good fit for cloud technology.

4. Security on the cloud is worse than on-premises

It goes without saying that cloud security is at the forefront of the minds of every IT department, after all it is an issue that should be, and is, taken very seriously. There are at least two clear reasons why businesses may be wary of migrating to the cloud; the hardware is shared between multiple other organizations, so there are security risks, and it is located off premises, so it is not readily accessible. There are, however, no legitimate reasons, aside from natural skepticism perhaps, for anyone to automatically assume that the cloud is not secure.

First off, security measures such as firewalls and encryption often come as standard as part of the package offered by cloud providers, whose reputations depend upon ensuring the safety of their customers’ data. Secondly, much of the maintenance to virtual machines and applications can usually be performed remotely, with only essential maintenance to the hardware that supports users’ data being provided by cloud server centers themselves.

There are many cloud storage systems providing the highest level of security against cyberattacks or data breaches.

5. Your cloud will be maintained and secured for you

Because their applications, data, and virtual machines are stored off premises, it is understandable that a user may assume it is all being maintained for them, but the cloud provider often won’t perform any maintenance on the things that are running on its hardware. They are obliged to deliver power, heating, and cooling to the hardware that stores clients’ data and runs apps, but anything in addition to that is usually left in the hands of the user, so it is worth clarifying the maintenance and security terms in an agreement with a cloud provider.

6. The cloud is public and so is everything you upload

There is a natural association for many between the word “cloud” and popular public services such as the ones that are provided by Google, Microsoft, and Amazon. The cloud is an architecture that can be implemented in the public domain, but it may also be hosted by a provider or at a local company. It’s often a combination of all three of these: public, private, and legacy services.

A common mistake for lots of businesses is to make the assessment that their apps aren’t compatible with running on the public cloud, and therefore to resist from making any migration to the cloud whatsoever. However, such companies should instead be looking to start small by identifying who uses what apps and how their experience can be improved and secured, rather than performing a previously debunked all-in-one migration. Only then will the business be in a strong position to identify which of their apps are prime candidates for offloading to the cloud in order to free up internal resources, in turn improving performance and functionality.

By taking things one step at a time, it is easier to determine which applications are more suited for migration to public cloud and which are more suited to private cloud infrastructures. Not only will a business learn a lot about their own applications and about cloud technologies this way, but the gates will be open for possible innovations and efficiency is also likely to improve after each and every step.

Think private cloud infrastructure is the way to go for your company? Find the best virtual private cloud software on the market today!

7. Businesses are moving away from the public cloud

Those companies who have failed to be successful with their own migration are likely to peddle the myth that the current trend is for everyone to back away from using the public cloud. The reality could not be farther from the truth; there are incredibly few examples of anyone moving data away from the public cloud and it is certainly not a major trend.

Of course some companies are likely to have issues with certain aspects of the cloud, such as it costing more than they had anticipated in their budget, but in general such complaints can be avoided by setting out clear goals and having realistic aims, which is why they’re anything but a mass migration away from the public cloud.

8. The cloud is all about finances but savings are hard to find

It is common for businesses to cite monetary reasons as the main advantage of moving to the cloud, but it is important to have other motivations for migrating besides cutting costs. Those companies that think they will automatically improve upon their finances by using cloud services are quite simply opening themselves up to disappointment.

Of course saving money is more than possible when migrating to the cloud, but it’s not a given; doing so requires preliminary work in analyzing each specific situation.

On the other hand, many businesses assume that costs will actually end up increasing with time when using private clouds, but again the truth is not that straightforward. Capital expenditures can actually be lowered via reduced operational expenses and improved utilization of resources on a private cloud.

9. Availability of apps automatically improves on the cloud

It is without a doubt true that improved reliability and availability of apps are two of the biggest advantages to adopting cloud technology, however, this applies to those apps that are specifically designed for the cloud. Those two benefits won’t necessarily come to fruition out-of-the-box for most apps that aren’t cloud-centric. Issues will have to be addressed and code refactored in order to experience the advantages of improved availability of apps, irrespective of whether they are hosted on public or private clouds.

10. The cloud is just another IT initiative

Many long term benefits of cloud migration are possible if implemented with a well thought out business strategy and with clear aims. Cutting costs is possible, although it shouldn’t be assumed (as above), there is huge potential for innovation and time to market can be decreased too. These are just a few genuine, long-lasting advantages that can be realized from moving to cloud technologies.

The opposite is true on both counts. Firstly, the cloud is actually creating jobs rather than taking them, with cloud computing potentially generating over half a million jobs across key markets in the Middle East and Africa between 2017 and 2022.

A whole host of experts will be needed to maintain and improve upon growth and developments of cloud-based technologies in the near future, Secondly, data centers surely do consume large amounts of energy in order to keep them operational, but energy is actually be saved and pollution reduced when businesses move to consolidated cloud centers from their on-premises facilities.

The cloud or bust

There is no doubt that the popularity of cloud storage will increase and it’s only a matter of time before it powers many more companies. That’s why it’s more important than ever to understand what it is and what it isn’t and not to be deceived by common myths.

Want to learn more? Discover what cached data is and if you should keep or clear it or check out our roundup of cybersecurity statistics in 2019! 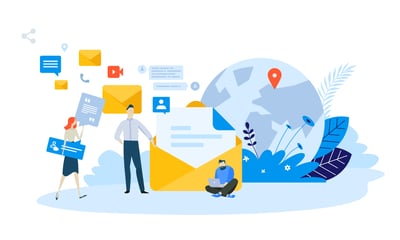 Why Is Email Marketing Important for B2B Growth?

Email is one of the go-to forms of communication for many companies who want to connect with...