How many times have friends or family members asked you, “have you been saving your money?”

It’s an incessant question, but one that many of us should be seriously considering – especially younger generations just getting started in their careers.

Saving money, more specifically saving money for retirement, has many upsides. Setting aside income early in your career could mean:

One of the top ways to save for retirement today is by contributing to a 401(k) plan. In this brief guide, we’ll discuss the benefits of a 401(k), why you should consider one if it’s offered by your employer, and how exactly they work.

A 401(k) is a retirement savings plan sponsored by an employer. It allows employees to divert a portion of their paychecks into a long-term investment account. A 401(k) is considered a “qualified” retirement plan, meaning it is eligible for special tax benefits under IRS guidelines.

The 401(k) plan was incepted in 1978, when Congress determined pensions were too expensive to maintain. The shift to 401(k) plans ensured companies didn’t have to provide a steady stream of income to their retired employees. Another idea behind 401(k) plans is that they allow employees to manage their funds with more flexibility.

However, there are different types of 401(k) plans, and understanding which one your employer offers is important.

So, you just started a new gig and lucky for you, the company offers a 401(k) retirement savings plan, now what?

Assuming you agree to sign up for the plan, you’ll be contributing a portion of your regular paycheck to your 401(k). The amount of money is determined by employees themselves, but the average for 2019 is about 3 percent.

It is, however, strongly recommended by financial professionals to contribute as much as you feasibly can to your 401(k) plan. Percentage-wise, this could be anywhere from 10-15 percent. Many companies that have 401(k) plans allow employees to manage their contributions using benefits administration software.

Some 401(k) plans offer employer matching after you’ve spent a certain amount of time with the company – typically a few years to incentivize employees to stay longer.

What does employer match mean?

Employer matching means your company will match your yearly contributions up to a certain limit (the most common being 3 percent). These limits will be laid out in the terms and conditions of your 401(k) plan.

Using our annual salary example of $60,000 and national contribution average of 3 percent, this would mean your employer would match that 3 percent – taking your contribution from $1,800 to $3,600.

Aside from setting yourself up nicely for retirement, employer matching is another key reason to take advantage of a 401(k). Otherwise, you’d essentially be leaving “free money” on the table.

The benefit of a 401(k) versus stashing money in a mattress is its ability to generate enough money for retirement with minimal risk. This is most commonly done through target-date funds, or TDFs.

Target-date funds: TDFs are comprised of low-volatile stocks and bonds. They are designed to be the most reliable investment option since they become more conservative as employees get closer to their retirement age. TDFs are managed by financial services companies like The Vanguard Group or Fidelity Investments.

Below is an example of a TDF which began in 2015. You can see how the fund adjusts for risk at around the 25-year-before-retirement mark. 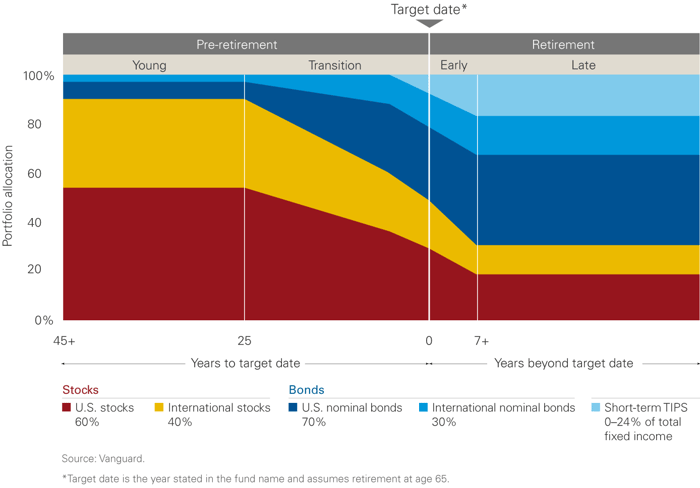 While TDFs are generally considered the most reliable investment option, employees aren’t handcuffed by them. Using your employer’s 401(k) administrator portal, you can see exactly where your money is distributed and make adjustments accordingly. Although, you should consult with your Human Resources department first.

Depending on the employer, there are a variety of 401(k) plans you could be presented with – the most common being a traditional 401(k) and the second being a Roth 401(k). Our graphic below shows some of the key differences between the two, with most of the differences based on how the money is being taxed.

Other less-common 401(k) plans include:

Withdrawing money from your 401(k)

That being said, you typically can’t tap into your 401(k) until you’ve reached the age of 59 ½. Doing so beforehand will lead to a 10 percent tax penalty on top of the usual tax bill that comes with traditional 401(k) plans. This is a hefty amount of lost money.

One final reason to consider a 401(k)

You may be out of a job if your company goes under, but thankfully, your 401(k) will be safe and sound. In the unfortunate event that this happens, employees have the option to move their plan over to an Individual Retirement Account, also known as an IRA, without paying any income taxes on it. This ensures the safety of your retirement funds.

That sums up all the basics of a 401(k) and why you should consider enrolling in one if it’s offered by your employer.

Still looking for that dream job? The one with a competitive salary, great perks, and generous 401(k) matching? Here are 4 key transferable skills you can apply in multiple areas of your life to become the prime jobseeker. 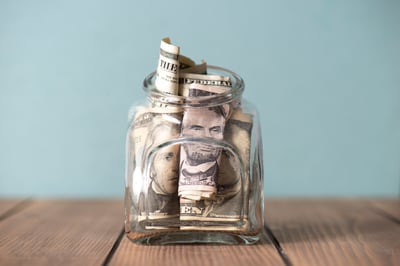 Planning for the future is daunting, especially when the end goal feels out of sight.

Saving for retirement can be a daunting task, but your 50-year-old self will be thankful you...

Most of us were taught early in life about the importance of being a team player.

Planning for the future is daunting, especially when the end goal feels out of sight.

Saving for retirement can be a daunting task, but your 50-year-old self will be thankful you...