It might not seem this way now, but there was once a time when franchising was notorious for being a shady business to partake in.

Before certain regulations were put into place by the Federal Trade Commission (FTC), franchisees were dangerously susceptible to scams where franchisors would muster up a lot of hype about their business, but didn’t have the know-how to perform well, let alone guide others in the business development process.

But that was then. Now, thanks to the FTC, it’s harder for franchisees to find themselves investing in a poor business plan and with nowhere to turn. While scams still exist in many forms today, potential franchise owners can protect themselves by thoroughly reviewing the franchise disclosure document.

What is a franchise disclosure document?

A franchise disclosure document is a legal document that must be given to people interested in joining a franchise. It is a part of the due diligence process, which is an investigation that someone will conduct before they enter an agreement with someone else or sign a contract.

What is the function of the franchise disclosure document?

Franchise disclosure documents exist to provide franchisees with all of the information they should need to decide whether or not they would like to join a franchise.

It is extremely wise for a franchisee to go through the franchise disclosure document before signing the franchise agreement so they don’t agree to certain terms and conditions they are unaware of. Once that document is signed, they are legally obligated to abide by the duties, rules, and regulations listed within it.

If you look through your franchise disclosure agreement and gather that you have no idea what any of it means, don’t worry. Consider using legal services to get some help translating that jargon into something you understand.

How are the franchise agreement and franchise disclosure document different?

Franchise agreements and franchise disclosure documents are often times confused for one another. The best way to distinguish between the two is to go through the process of how a franchise is started. 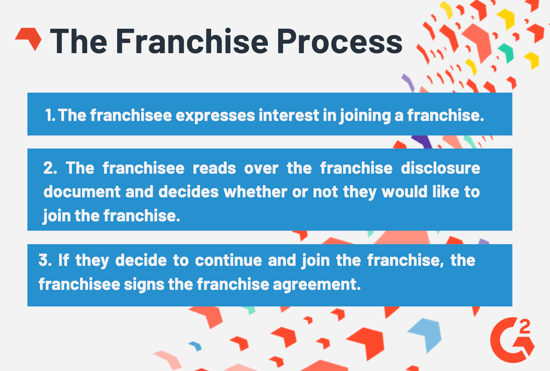 The Franchise Rule, published by the Federal Trade Commission, prohibits deceptive acts in the franchise industry.

According to the Franchise Rule, franchisors must provide all franchisees with the disclosure document containing 23 items of disclosure. The franchisor is also obligated to provide the document to the franchisee at least 14 days before it needs to be signed or before any money is exchanged.

Is the franchisor you are working for a big fan of doing everything online? Check out some e-signature software and eliminate the need for physical documents.

As stated above, there are 23 specific items of disclosure that every franchisor must include in the franchise disclosure document. The 23 items include:

1. The franchisor (+ any parents, predecessors, affiliates): how long the franchisor has been in business, competition, industry-specific laws, required licenses, and permits.

2. Business experience + key persons: executives of the franchise system and their experience.

3. Litigation history: prior litigation involving executives, the franchise relationship, or claims against the franchisor, or anything that would present a problem/reason for the franchisee not to join.

4. Bankruptcy: if any of the franchises or its executives have been involved in a bankruptcy.

5. Initial franchise fee: the costs associated with starting and operating a franchise. This can include upfront costs and recurring fees like royalties and advertising fees.

6. Other fees: these fees can include training and assistance programs and advertising costs.

7. Franchisee’s estimated initial investment: range of the investment and estimate of working capital.

8. Restrictions on sources of products/services: whether or not the franchisor restricts certain suppliers.

9. Obligations of the franchisee

11. Obligations of the franchisor: assistance, advertising, computer systems, and training.

12. Territory: the franchisor is not obligated to give a franchisee a specific territory, but sometimes a franchisor will have geographical restrictions.

16. Restrictions on goods and services offered by the franchisee

19. Financial performance representations: franchisors have no obligation to disclose sales/income forecasting, but if they decide to, they legally need a reasonable basis for their claims.

20. Franchise outlets: information about current and former franchisees. This is valuable information to franchisees. More franchises in the area implies competition, and the number of terminated relationships might indicate problems.

21. Financial statements: status of a company’s financial situation. The franchisee will use this to identify risk of going out of business or bankruptcy.

22. Contracts: this is where the franchise agreement is outlined.

Starting a business is no simple venture. It takes determination and experience, but more than anything, knowledge of the business you are about to operate. The franchise disclosure document provides all of the nitty-gritty details that answer the question, “Is investing in this franchise worth my time, money, and energy?”

Finished reviewing the franchise disclosure document? Check out our resource on how to start a franchise for your next steps!

Mary Clare Novak is a Content Marketing Associate at G2 in Chicago. A recent graduate, she is happy to be back working in her favorite city. In her free time, you can find her doing a crossword puzzle, listening to cover bands, or eating fish tacos. (she/her/hers)