For Snapchat’s first few years of existence, the media-sharing app was known for its rapidly disappearing photo and video messages.

These short-lived messages encouraged candid and natural conversations, and quickly became a hit among Snapchat’s growing user base.

However, users still wanted the ability to save some of their favorite pictures and videos. In 2016, Snapchat met this request with its introduction of Snapchat Memories.

What is Snapchat Memories?

Snapchat Memories is a feature that enables users to save photos and videos for later instead of allowing them to disappear when the designated time is up. These snaps and stories are saved within Snapchat under your Memories tab and can be viewed, edited, sent, saved to your device, or reposted on your Snapchat story.

For individuals and professionals alike, this can be a superb tool to save particular snaps and use them again at a later date. If you’re using Snapchat for business, then this feature is an easy way for you to compile similar videos and photos to use again on your brand’s account (or any of its other social media profiles).

You may know how to use Snapchat, but this is your ultimate guide to Snapchat memories – including how to make them, how to access them, who can see them, and, how to see your Snapchat memories year-end story for 2018. Click ahead to the section you’re looking for, or read on.

Ready to get started?

Snapchat Memories is a feature that enables users to save photos and videos for later instead of allowing them to disappear when the designated time is up. These snaps and stories are saved within Snapchat under your Memories tab and can be viewed, edited, sent, saved to your device, or reposted on your Snapchat story.

This feature also grants users the ability to search their memories using keywords like “food” or “Thanksgiving”. Snapchat will then combine all of the saved memories that are relevant to your search and package them into a new, unique Snapchat story.

This was an exciting move for Snapchat for a few reasons. As much as some users loved the self-destructing content, some were frustrated about the idea of spending the time to snap the perfect picture, only to have it almost-immediately disappear.

However, to search through your memories, you have to have some! Luckily, creating Snapchat Memories is simple.

How to make Snapchat Memories

If you know how to save Snapchat videos, then creating Snapchat Memories will come especially easy for you!

To start, open up your phone and launch your Snapchat app. Open up the Snapchat camera and snap a picture or take a video. Make sure that if you want to add a caption, doodle, filter, or geofilter, you do so now – before you save the snap to your memories.

Once your Snapchat looks the way you’d like it to, you can save it to your memories by pressing the save icon in the bottom right corner. Contrary to popular belief, this does not save the photo or video to your camera roll. It saves it to your memories! 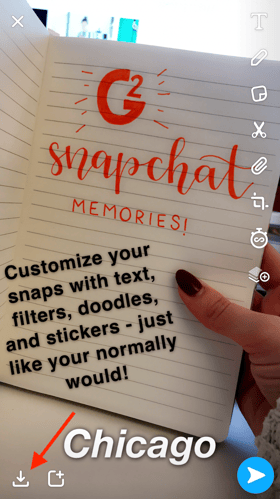 When you press that button, the picture or video you just took will automatically store with the rest of your memories, a photo album stored within the Snapchat app for easy access and quick repurposing. You'll know you were successful if you see a pop-up that says "Saved to Memories!" 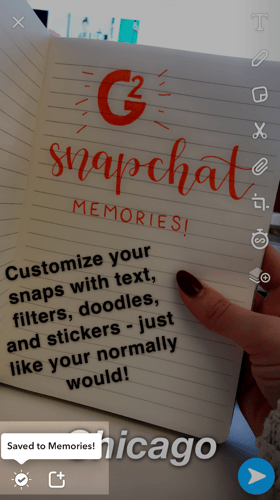 You can even gain some Snapchat trophies from saving snaps and stories to your Snapchat Memories, so the more you make, the better!

Next up, we’ll show you just where to find those precious memories.

To access your Snapchat Memories, first grab your smartphone and launch your Snapchat app. Open up the Snapchat camera, but instead of taking a picture or video, press the button directly below the recording button (it sort of looks like a pair of fanned-out cards). 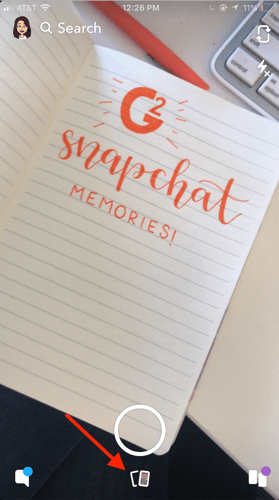 This will open up all of your Snapchat Memories, which you can then sort by pictures and videos that you saved individually and entire stories that you saved altogether.

These memories will be displayed in reverse-chronological order, with the most recent snaps that you saved appearing up at the top. Individual photos and videos you’ve saved will appear as a rectangle. If you saved an entire story at one time, it will appear as a circle (which you can see in the image below).

The best part about Snapchat Memories is the ability to look back on them with your friends and family!

To repost or send a Snapchat Memory, open up your Snapchat Memories and find the photo, video, or story you’d like to send. Tapping on the photo will open it up to your full screen – now, it should look like any other snap that’s ready to send.

If you’d like to send the snap as is, simply press the blue arrow in the bottom right corner and select your recipients. They’ll know you’re sending a Memory, as opposed to a snap taken in the moment, because it’ll appear as a new chat instead of a new snap.

The screen recording below will take you through the process. If you’d prefer to edit the snap before you send it (change the filter, erase your previous caption, etc.), you can do that too! Click the menu button in the top right corner (three stacked dots) and tap “Edit Snap.” This will pull up the editing tools you’re used to – you can change the caption, add stickers, doodles, and more!

When your snap looks the way you’d like it to, click the blue button in the bottom right and send it to your desired recipient. Or, you can put it directly onto your Snapchat Story!

Can people see my Snapchat Memories?

Good question! In a short answer, no – not unless you let them, that is.

Unless you hand off your phone and allow somebody to scroll through your Snapchat memories, they aren’t able to see them. Snapchat Memories are not accessible to the public (or anybody but yourself) like, say, a Facebook album.

However, if you’re nervous about somebody seeing particular snaps you’ve saved to memories, there’s a feature for that! Snapchat “My Eyes Only” allows you to store memories in a secret album protected by a passcode of your choosing.

You can move a Memory to your “My Eyes Only” folder by pressing the menu button (three stacked dots) in the top right corner and selecting the “My Eyes Only” tab.

How to see your 2018 Snapchat Year-End Story

We’ve reached the time of year where all of our favorite social media platforms are helping us recap our year. We’ve all seen our Instagram best nine and our Spotify Wrapped – now, what about your Snapchat Year-End story? It’s the ultimate Snapchat Memory.

Your Snapchat 2018 Year-End Story is a compilation of some of the snaps you’ve saved to your Snapchat Memories. Snapchat will put these snaps into a short video highlighting travels, sunsets, laughs, music, selfies, and more – depending on the content of the snap itself.

To view your Snapchat 2018 Year-End Story, access your Memories as your normally would. It will appear in your Memories with the title “My 2018 in Snaps.”

Enjoy it by yourself, or, if you want to share, you can post it to your story or send it to your friends!

If you don’t see your Snapchat Year-End Story, it means you didn’t save enough content throughout the year. Start saving more snaps in the new year, and you’re just 12 months away from your 2019 Year-End Story.

You’re officially an expert on all things Snapchat Memories.

Claire is a Senior Marketing Manager at Blueprint and a former growth marketing team manager at G2. Born and raised in the Chicago area, her brief stint in Ohio (University of Dayton) gave her a new appreciation for deep-dish pizza, but left her well-versed in Cincinnati-style chili and "cities" with a population fewer than 400,000. While not writing, Claire can be found practicing calligraphy, seeking out the best dive bars in Chicago, and planning her next trip. (she/her/hers)

What We Can Learn from McDonald’s AI Integration (+Who Does it Benefit?)

When you think of McDonald’s, your first thought probably isn’t how they’re a thought leader...