Letters of recommendation and positive input from references can significantly increase a candidate’s likelihood of getting hired.

Think about it. You’re on the fence about something. Suddenly, you get a letter from someone of good repute telling you to give that someone or something a chance. They go so far as to list specific reasons why.

How much more likely are you to follow their advice?

Letters of recommendation can be the difference between a candidate who gets the job and one who doesn’t, and should be as professional as any other business letter.

So, if you’ve been asked to write a letter for someone, whether for college admission, an internship, or a full-time career opportunity, you want to do it right.

Read on for instructions and advice on how to write a genuine and persuasive letter of recommendation, as well as to see examples of letters that work.

Tips for writing a letter of recommendation

It’s important you have a clear definition of what we’re talking about in letters of recommendation to help hiring managers make a fair assessment of a candidate. If done poorly, you could reduce your mentee or employee’s chances at getting a desired job.

So, let’s begin by answering the question, “What is a letter of recommendation?”

What is a letter of recommendation?

A recommendation letter can be most simply defined as a document wherein the writer describes and assesses a person’s abilities, experiences, and achievements under the writer’s tutelage. The writer should always be someone who has worked closely with the subject person, whether as a boss, mentor, or coach. 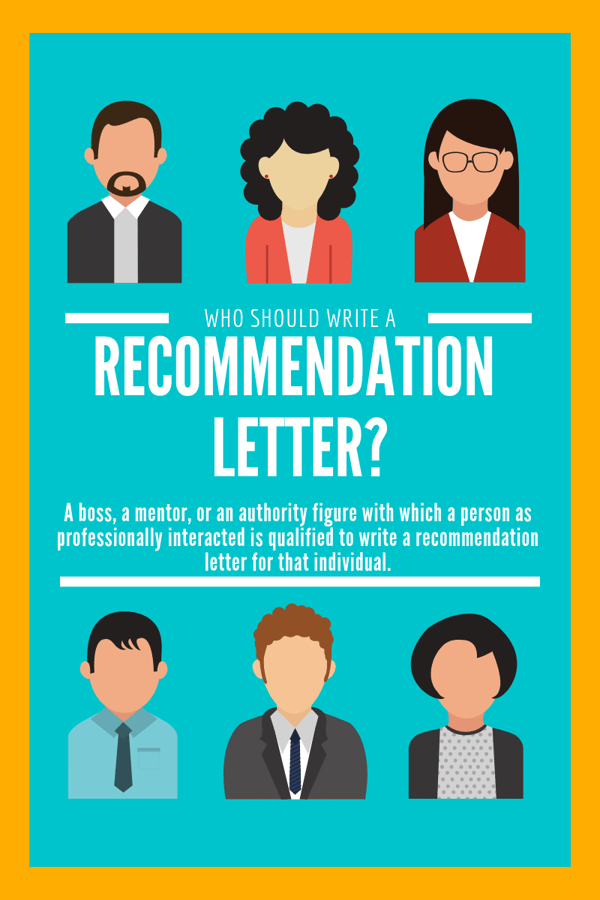 Letters of recommendation are one way to vouch for someone you know – to help them reach that next step in life. If someone is asking you to write them a letter of recommendation, but you don’t have good things to say about them, it’s best to decline their request. You should only write letters for those whose ability you can genuinely speak to.

How to write a letter of recommendation

A letter of recommendation, also known as a recommendation letter or a reference letter, should be customized according to an individual and their industry.

However, there are a few general best practices you can familiarize yourself with before picking up the pen.

Here are three generalized tips for writing a letter of recommendation.

1. Tell the hiring manager who you are.

The person reading your letter will want to know why your voice matters. Say the candidate is applying for an engineering role.

Are you an engineer at NASA who has personally mentored this candidate in aerospace engineering for the past year? (I’m from Houston, sorry.)

If yes, say so. Your credentials are valuable and show this candidate not only has this connection, but also made a positive impression in the professional sphere.

Your introduction should come at the beginning of the reference letter to establish credibility early. This convinces a hiring manager to pay attention.

Some opportunities might ask for a reference letter from a colleague or friend. In which case, career is not as important as the capacity to which you can speak to that person’s character.

Most letters, however, will be from employers or someone who has been in a position of authority over the candidate. That’s what we’re focusing on here.

When writing a letter of recommendation, it’s important you make it clear you understand the role you are recommending the candidate for.

This is important for a few reasons. For one, you’re able to speak to the candidates abilities within that line of work specifically or say why they’d be a fit for an industry change. This increases a hiring manager’s confidence that the candidate would actually be a good fit for the role to which they are applying.

For two, it customizes the letter, as opposed to generalizing. Hiring managers are reading about tens to hundreds of candidates for varying roles, and a generic letter of recommendation isn’t going to do your referee any favors.

If you’re unsure of the role or specifics the candidate is applying for, ask if they could share the job description so you can see a detailed list of requirements.

Ideally, the person you’re referring has given you all of this information up front so you don’t have to rack your brain trying to figure out how their past and future roles connect.

3. Have specific reasons over generalizations.

As we mentioned previously, general information is not helpful for someone trying to break into the job market or continue their career. Instead, a letter of recommendation should cite a few specific examples of ways the candidate has made a positive impact or impression in their previous role.

As your executive assistant, there may have been a time when that candidate was able to organize backup food for a 400-person event after the original caterer and staff got food poisoning. These are the kinds of anecdotes hiring managers will remember.

Including these examples shows you weren’t just a supervisor who had minimal contact with this referee. It shows the impact the referee had in their previous role and implies the impact they could have, should they be hired by the desired company.

For maximum persuasion, include a couple of examples, as opposed to just one. 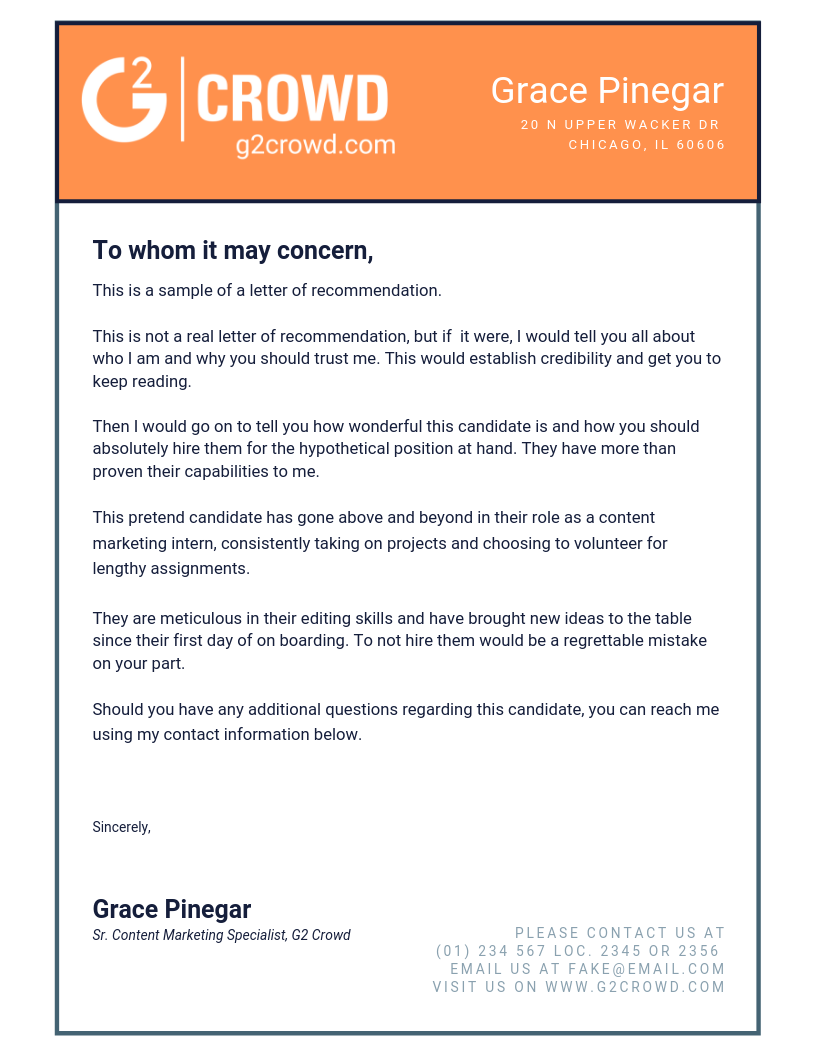 Like I said earlier, recommendation or reference letters should be customized and personalized. That being said, every letter of recommendation should consist of the following characteristics (we’ve mentioned most of these already, but here they are in a concise list):

For a more specific example, examine the following template. This template should not be copy/pasted, but rather serve to inspire the unique letter you intend to write.

If you’re a teacher or mentor, it’s possible you are asked to write such letters multiple times a year. It is my hope that a template makes your job a little easier, while still allowing you to vouch for your students and pupils in unique ways.

Template for letter of recommendation:

It is with great pleasure that I recommend [Referee Name] to work as [job title] with [Potential Company title].

Working with [Referee Name] was a pleasure, as our team benefited from [his/her] creativity and critical thinking skills. [Referee Name] brought tremendous value to our team with [his/her] punctuality, organization, and willingness to work until the job was done.

[Referee name] brought with [him/her] a wealth of knowledge on [relevant topic] and has used that knowledge to help us achieve [name specific goals]. For example, [list a specific example wherein referee displayed the use of the aforementioned knowledge or skill].

[Referee name] was consistently an asset to our organization. [He/She] brought new ideas to every meeting and provided a fresh perspective when our team was stuck in our habits. [He/She] also worked well the rest of the team and fostered positive relations throughout the company.

I cannot say enough positive things about [referee name]. Without hesitation, I recommend [him/her] for as [potential position name] at [company]. I can recommend [referee name] not only according to [his/her] work ethic, but also [his/her] exceptional character.

Should you care to discuss this referral further, I encourage you to contact me at [contact information]. I am happy to address any additional questions regarding this candidate.

If this is your first time writing a reference letter, or if you’ve written 100 letters and are looking for a refresher, allow me to offer you some general tips. These tips are good for someone who’s stuck with writer’s block or simply wants a fresher way to craft.

(Elongated explanations can be found below the graphic.)

If you’ve had someone ask you to write a letter of recommendation, I hope you took it as a compliment! It means they respect you and value the impact you could have on their career.

It also means you’re part of the professional community, so you’re likely looking for ways to constantly improve. 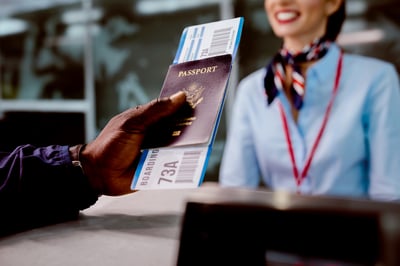 Sometimes you just have to get away. Far away. 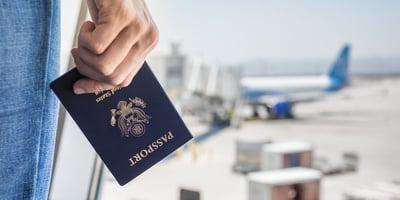 How Long Does It Take to Renew a Passport? (+How to Do It)

What is it that makes renewing a passport so daunting?

Earn More Money as a Freelancer With These 6 Tips

You have to be smart and creative if you want to make money freelancing.

Sometimes you just have to get away. Far away.

How Long Does It Take to Renew a Passport? (+How to Do It)

What is it that makes renewing a passport so daunting?