You’ve been totally killing it at work and you’re ready for a promotion. But do you know how to ask for one?

You’ve already brushed up on your leadership skills, and you’re ready for some additional career growth. Your next step is to position yourself for a promotion. Understanding the process of asking for a promotion will act as your blue-print for success.

6 steps to asking for a promotion

Don’t sweat it – a lot of people are nervous when asking for a promotion for the first time. The good news is that there’s never been more information or resources available to guide you through the process.

How to ask for a promotion

Planning to ask your boss for a promotion is no small task and the process for preparing to isn't either. These steps seem simple enough to follow, but it’s important to note that the complete process can take anywhere from three to six months when done correctly.

The first step to any sort of career planning should always be completing thorough research. You’ll want to spend this part of the process gathering as much outside information as possible to bolster your case.

One thing to keep in mind is how you’re going to position the promotion you want with the company goals and expectations. Don’t be too cavalier in creating a promotion plan for yourself that it completely steps outside what your company would normally approve. You want to make an ask that you think your company will approve.

Now that you have an idea of what sort of promotion you should be aiming for, it’s time to make the case for why you’re the person who deserves it. This is the part of the process that most people feel uncomfortable with because they’re uncomfortable with bragging about themselves. You need to kick that way of thinking to the curb.

This is the time to be your own biggest fan. You haven’t made it this far in your career without doing anything worth bragging about! Take an afternoon out of your day and create a list of your biggest career accomplishments over the past year. Isolate your three biggest wins and use those are the cornerstone of why you deserve a promotion.

Be generous with your list, but try and only include things you can backup with data. The most persuasive case you can make to your boss is to show them the dollar value behind what you bring to the company.

How have you impacted the bottom line? How much would losing you to a competitor hurt the company? These are sort of things you'll need to consider. In order to get what you want, you need to explicitly explain just how valuable you are.

This is ammunition you’ll use when you explain to your boss why you believe you deserve a promotion. Keep this list at the top of mind throughout the process.

This time has already been scheduled to review and discuss your annual performance with your boss which is what makes it as good a time as any to set yourself up for a promotion. You may consider using this time that you’re preparing to ask for a promotion as an opportunity to prepare for your upcoming performance appraisal. It never hurts to be prepared!

Wouldn’t it be great if your boss could just read your mind and know you want a promotion? Sadly for us, it doesn’t work that way. That’s why you need to do what’s called “front-loading” your promotion request before you make the big ask. Start doing the work to secure your promotion now, so that asking your boss for a promotion later will be a breeze. 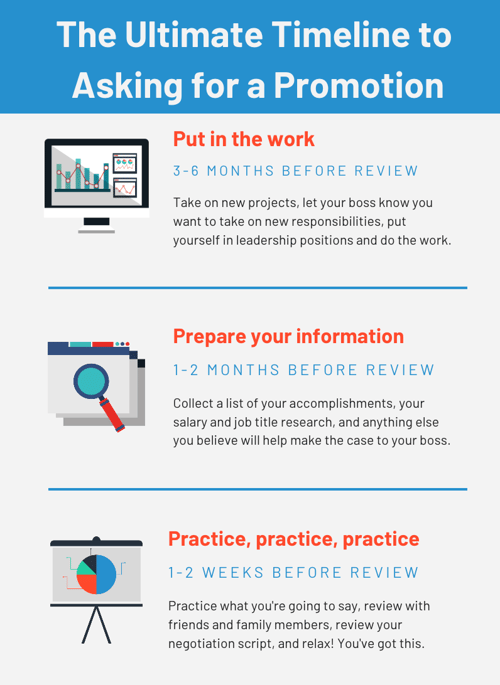 Don’t get caught in the awkward situation of your boss being surprised by your request for a promotion. The work you are doing and the attitude you put into the office environment should send up flags to your boss that you are working toward something. Make it very apparent that you’re ready to take the next step in your career.

5. Practice how you’re going to ask

Now that you’ve gathered all the important information, it’s time to prepare how you’re going to ask for your promotion. Don’t sweat a thing. We’ve put together a foul-proof script that you can modify and use to ask for a promotion.

Once you’ve nailed down what you’re going to say, you just need to practice. Repeat the script over and over until it becomes second nature to you. Once you’re comfortable with your script, you should practice making the ask by having a friend or family member stand in for your boss.

Try a few scenarios where your “boss” played by a friend denies your request at first. This will help you practice your recovery and refocusing strategy. You want to be as prepared as possible before doing it for real.

6. Be prepared for the worst

There is always a chance that all of your hard work might be met with resistance. If that’s the case, you should be prepared to answer any follow-up questions or objections your boss may have. Not only will it show that you are willing to stick up for yourself, but it shows you’ve done your research and you know what you’re worth.

Here are a few sample script ideas you can use if your boss pushes back against your promotion request. You can access the rest by downloading our free script for asking for a promotion linked above.

If your boss says: “We’re not giving out promotions at this time…”

You say: “I understand that there weren’t any plans to hand out promotions this year, but I think an exception should be made based on how the nature of my role has evolved. I’m doing the work of a -insert desired title here- at other companies and having my title changed to reflect that will not only reflect the level of work I actually do, but it will also eliminate confusion for our customers.

If your boss says: “I’m going to need some time to review this with upper-management…”

You say: “Great! I’m happy to join that meeting or provide any of the research and data I’ve done to help make this decision as easy as possible. Let’s plan to meet again in a month to continue discussing the progress of this proposal.”

If your boss says: “I think you’re close, but you’re not quite there yet…”

You say: “I understand and appreciate the feedback. Let’s set up a meeting to discuss some areas where you think I can improve and brainstorm some new projects that I can jump on to help bridge those gaps.”

3 things to avoid when asking for a promotion

While there’s no right way to ask for a promotion, there are some things you should avoid. Be careful when asking that you avoid these three sticky situations.

1. Don’t assume this will be a one and done conversation

Even if your boss is on your side, there’s a great deal of paperwork and other people who will need to be involved in the process. Asking for a promotion usually involves a series of conversations before anything becomes final.

2. Don’t threaten to leave unless you’re ready to lose your job

Playing hardball and threatening to leave your company unless you get a promotion can sometimes put the right amount of pressure on your boss, but it can also get you walked right out the front door. Don’t resort to this tactic unless you’re ready to pack your desk up and ruin your working relationship with your current company.

3. Don’t get discouraged if things don’t go your way

Just because your boss denies your first request for a promotion doesn’t mean you’ll never be promoted at your job. Ask your boss for an actionable list of things you can work towards between now and your next review. Show them that you can take constructive criticism and that you’re serious about your career advancement.

In order to be promoted, you need to get comfortable promoting yourself

The key to asking for a promotion is confidence in the work you do. Don’t fall into the common trap of downplaying your own accomplishments and successes. It’s important to be your own biggest hype man and make sure that the people in charge know the value you bring.

Looking to sweeten the deal? Learn how to ask for a raise along with your promotion. 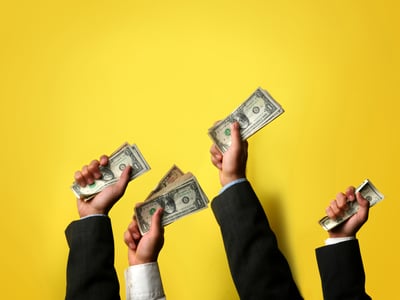 You work hard for the money, but are you really getting paid what you deserve? 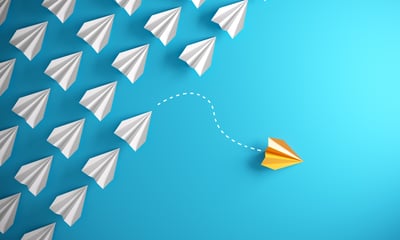 Burned out? Stressed out? Bummed out? Maybe it’s time for a change. 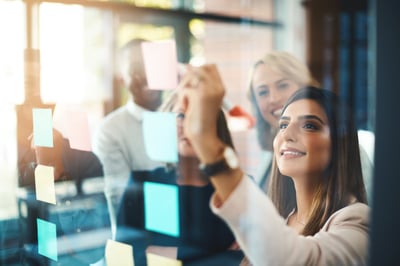 What do you and your career path have in common? You’re both unique!

You work hard for the money, but are you really getting paid what you deserve?

What do you and your career path have in common? You’re both unique!