All this and more defines the reality of civil action lawsuits. While they lack the glamorize attention of criminal court cases, they are nevertheless an important element of the American legal system and a vital way by which the rights of individual citizens are protected in the face of the countless vagaries and shades of gray that constitute daily life. Of course, you could avoid the fuss with some good conciliation, but sometimes court is just inevitable!

Understanding the process of bringing a civil action before a court is an important part of making sure your own rights and dignity as an American citizen are protected.

Characteristics of a civil lawsuit

Like any court proceeding, a civil action involves two parties: a plaintiff and a defendant.

How does a civil lawsuit work?

In a civil lawsuit, one party (the plaintiff) brings a complaint to the court seeking for another party (the defendant) to be held liable for damages inflicted on the plaintiff by action or inaction on the part of the defendant. These cases are general done to seek monetary restitution and can involve anything from family legal affairs to corporate contract disputes.

Civil lawsuits aren’t just held between two people for the sake of writing a malicious act, however. A civil case can be brought again business and corporate entities, and can be made for damages that resulted from inaction as well as action. They can be brought to a court by anyone, for any reason. This isn’t to say it’s a good idea to make baseless charges; such irresponsible action can lead to countless squandered hours and even more dollars wasted.

There are four broad types of cases heard by civil courts. Below is a brief overview of each:

Phases of a civil lawsuit

Now that we’ve been over the background of a civil action, let’s dive into the parts of a civil case. Note that the below process is specifically tailored to civil cases and has some differences from litigation as a general whole: 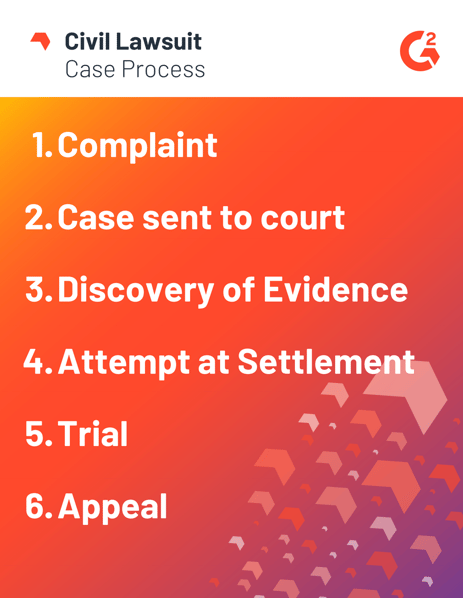 The complaint is where a civil action originates. This process involves sending a civil action to the appropriate court by filing a document known as a “complaint” which outlines the reasons why the defendant is responsible for damages to the plaintiff.

This pre-trial phase involves a back and forth between the plaintiff and defendant in the form of motions filed by the parties attorneys.

If the defendant believes the case lacks a basis in reality, they can file for a motion to dismiss the case outright. On the other hand, if the plaintiff and defendant agree about the facts of the case, then the plaintiff can file a motion for summary judgment, which automatically makes the defendants liable for the alleged damages. If either of these motions are accepted by the court, the civil case is closed and no further action is required.

This phase is where both the plaintiff and defendant submit evidence for the civil court to review either supporting the claim of the plaintiff or attempting to discredit it. Additionally, depositions may be made at this time, where someone gives a testimony under oath regarding the information of the cases, much like a witness would do in criminal cases.

During the process of collecting evidence, the respective parties will have one or more pre-trial meetings with the presiding judge. There, they update the judge on the progress of their evidence collection and discuss a possible settlement: a legally binding agreement where the parties sit down for a mediated negotiation in order to come up with terms of resolution so that the case does not have to progress to a full trial.

If no settlement is reached, then it’s time to throw down in a court of law!

Both parties are summoned to court where the plaintiff presents their evidence followed by the defendant. Because the purpose of civil cases is to prove the claims of the plaintiff, the onus is on them to prove that, more likely than not, their claims are true. The defendant is merely responsible for submitting evidence to refute this claim.

This last phase is optional and doesn’t occur in every civil case.

When a party — either the plaintiff or defendant — loses the case, they can choose to appeal the decision should they choose. An appeals court will then decide whether or not to dismiss the appeal, affirm or reverse the judgment, or send it back for a retrial. It is common for a lawsuit to go back and forth between civil court and appeals court multiple times before a final resolution is achieved.

Difference between a civil and criminal lawsuit

While both a civil and a criminal case involve complex legal proceedings and can both go to a formal trial, there are several key distinctions between these two common form of legal actions.

A civil case, as was discussed above, can be leveled by anyone against any other member of society, be they an individual person or  a corporate entity. Generally speaking, this is done to seek monetary compensation and formal statements of apology and wrongdoing, not time behind bars.

A criminal lawsuit has to be brought before the court through a formal accusation known as an indictment. In this instance, the case is handled by the government and not by the victim,  as would be required in a civil case. The philosophy behind this is that it is the government's responsibility to prosecute criminal offense on behalf of the people. Finally, the sentences of criminal cases tend to be much more severe, and can include prison time or community supervision (such as parole) in addition to monetary fines.

The ins and outs of the legal system can be confusing at the best of times — the term “legalese” wasn’t coined for nothing! Hopefully, this guide will have provided you with a much stronger sense of what civil actions and civil cases entail, and what they could potentially mean for you.

Interested in learning more about basic legal processes? Check out our guide on 5 legal issues PR professionals should know about. 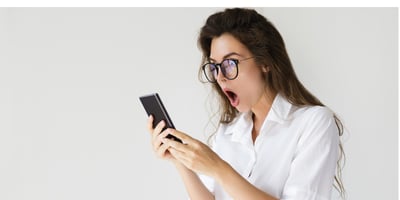 Can HR Do That?! Your Guide to HR Law

We’ve all been there. A situation at work arises and the action your management or the HR... 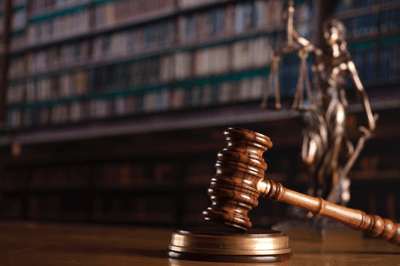 What Is a Plaintiff? Understanding Your Role in a Lawsuit

Whether you’re standing in front of Judge Judy or the Supreme Court, you should understand... 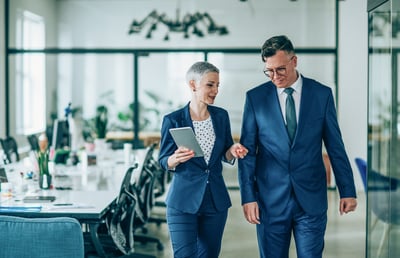 What Is Corporate Law and Why Is It Important?

Abiding by the law has wiggled its way into our daily routines.

Can HR Do That?! Your Guide to HR Law

We’ve all been there. A situation at work arises and the action your management or the HR...

What Is a Plaintiff? Understanding Your Role in a Lawsuit

Whether you’re standing in front of Judge Judy or the Supreme Court, you should understand...