When it comes to any manager-employee relationship, the manager is always the one who’s in a position of power.

How they communicate and behave will influence the level of trust and rapport they can build with each individual on their team. If you’re a manager who’s closed off, it’s likely that your direct reports will be too. However, if you’re a manager who practices vulnerable leadership, the floodgates will open for some truly amazing conversations.

From having a continuous stream of feedback to understanding what truly motivates your team, being vulnerable with your team allows for more open dialogue for all those involved.

In this article, we’ll walk through what vulnerable leadership is and how you can best practice it. Let’s get started!

What is vulnerable leadership?

For many, vulnerability can be seen as being weak. However, the opposite tends to be true. While being vulnerable can increase your risk of being hurt, emotionally or physically, it also opens up the opportunity to have meaningful conversations that build authentic relationships. In fact, studies have shown that social connections benefit our mental and physical health. So why limit these to our personal lives?

For leaders looking to practice vulnerability, it’s important to understand that being vulnerable doesn’t mean that you need to share your entire life story; waterworks are not a requirement. Rather, it’s about understanding where your strengths and weaknesses lie and being honest about them with not only your team, but yourself too.

A vulnerable leader asks for help when they need it

Strong leaders are self-aware and confident; they understand that they’re not the expert at everything (and they don’t need to be). When leaders feel comfortable enough to lean on their team to fill in any gaps, it’s an act of vulnerability that strengthens the team. That’s because it enables the best person on the team to complete the task at hand rather than the most senior. When leaders ask for help, it’s not a sign of weakness, but rather one of great leadership. They have a deep understanding of the capabilities of each individual on the team.

A vulnerable leader can admit that they’re not a superhero

Leading a team is an incredibly tough job that requires a lot of time and focus. In any organization, many leaders are promoted because they start off as great individual contributors. As a result, they’re promoted to a role where they’re in charge of leading people (with little-to-no-experience). It’s especially important for leaders who are still learning how to lead to be upfront and honest with their team.

This can be as simple as making a statement like:

Just like you’re all growing and developing in your skills in marketing, I’m doing the same with management. I’ve been in a people-leadership role just shy of one year now and I know I’m not an expert yet, but I’m trying my best to listen to your ongoing feedback, level-up my skills, and improve my management skills every day.

Leaders, be honest with yourself and with your team. It will make a difference.

How to practice vulnerable leadership

If you want your team to open up to you, you’ll need to open up first. Remember that you’re in a position of power in the manager-employee relationship, so it can be very intimidating for an employee to open up. As the leader and the person in power, you’re ultimately setting the tone for how you communicate with one another. When you open up, you’re setting the tone of open, honest communication.

Opening up doesn’t have to be this big secret revealing process. Instead, it can be as simple as sharing challenges as you face them, as well as things you’re incredibly proud of. Here are some statements to inspire you to open up during your next one-on-one:

2. Create a psychologically safe space for your team

When you foster a culture of psychological safety, you proactively create a space for team members to feel safe sharing ideas, feedback and generally be themselves in the workplace. In this section, we’ll walk through what psychological safety is, why it matters and how to put it in practice.

What is psychological safety?

Originally defined by Amy Edmundson, a Harvard Business School Professor, psychological safety is “a shared belief held by members of a team that [the team culture] is safe for interpersonal risk-taking." She defines it as “a sense of confidence that the team will not embarrass, reject, or punish someone for speaking up.” In a nutshell, psychological safety means that everyone on the team will support and listen to one another in a respectful manner.

Why does psychological safety matter?

Following the success of Project Oxygen, which determined common behaviors of great managers, Google’s People Innovation Lab wanted to identify the dynamics that made up effective teams. Enter Project Aristotle.

In their research, the team at Google found that when it comes to teams, “what really mattered was less about who is on the team, and more about how the team worked together.” The number one factor on that list? Psychological safety. 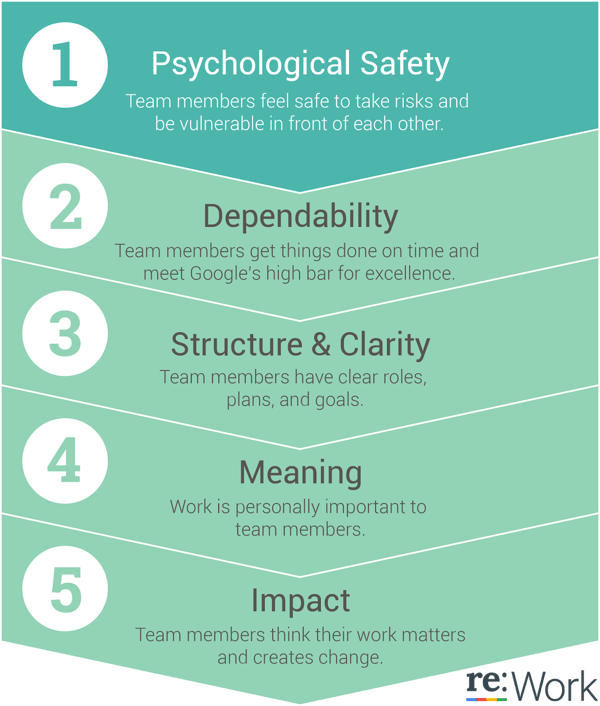 As Google puts it, “In a team with high psychological safety, teammates feel safe to take risks around their team members. They feel confident that no one on the team will embarrass or punish anyone else for admitting a mistake, asking a question, or offering a new idea.”

When everyone on the team puts in the effort to create a psychologically safe space, it allows for open, honest communication. Who doesn’t want that?

How to practice psychological safety

It’s not something that happens in a day, but rather something that leaders should be doing every single day. Here are three ways in which you can start practicing psychological safety today:

3. Make one-on-ones a place where sharing is encouraged

A Gallup study found that great managers are the single best benefit any company can offer their employees. One of the best ways for managers and employees to continue to work on their relationship is during one-on-one meetings: A dedicated time for managers and their direct reports to discuss anything from motivation and growth to roadblocks and challenges.

The chart below breaks down a manager’s role in one-on-one meetings: 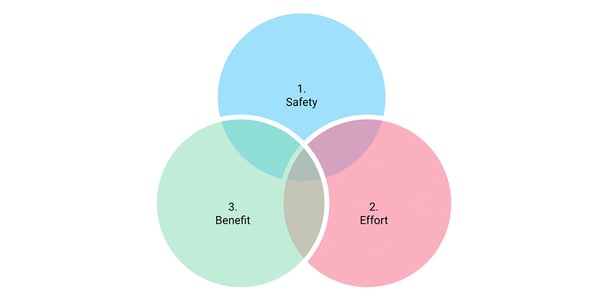 When put in practice, the chart above is an incredible management tool that makes sharing feedback and ideas a no-brainer for employees.

Aim for psychological safety to be high

How much effort does a direct report have to put in every time they want to share an idea, a piece of feedback or a challenge they’re facing? If they need to spend a ridiculously long time preparing, both emotionally and in planning how they’ll communicate the feedback, they’re likely not going to share it with you. Instead, those frustrations can fester and damage your relationship in the long run.

To gauge the effort level for your employees, put yourself in their shoes and think about:

Note that some challenges are good, especially when new ideas are brought up. This ensures that you’re always letting the best idea win, regardless of who pitched it. However, if someone is sharing their feelings with you, such as feeling frustrated when you interrupt them, this isn’t a place to challenge them, but rather probe to fully understand their point of view.

When it comes to your direct report’s sharing feelings, this is the difference between challenging and probing:

Challenge: “I don’t agree that I interrupt you often. Can you please share three times when I’ve done this?”

Probe for understanding: “I understand that getting interrupted can be very frustrating. It’s something that frustrates me as well. Are there times where you find that I’m doing this? Is it during our one-on-ones, team meetings, casual conversations? I’d just love to understand when and how this is happening so that I can become more aware of my actions and adjust as necessary.”

Aim for the benefit to direct reports to be high

You’ve reached a point where your direct report feels comfortable and safe enough to open up to you. How you act on that feedback is what will impact the benefit for their sharing. If they share a challenge they’re facing, it’s not enough to say you’ll do it, you actually have to do it.

It can be as simple as letting them know you need the week to think about it and you’ll re-discuss during your next one-on-one. It can also be more complex like changing a process that they felt was broken or inefficient. When your direct report feels like opening up to you improved their situation, they’ll continue to open up.

There are so many one-on-one questions at your fingertips that can help drive more meaningful conversations between you and your team. When it comes to your one-on-ones, try adding in a new prompt to your meeting agenda every meeting. Keep in mind that, if it’s a question that can be answered by both of you, be the first to answer. For example, if you ask your direct report, “What has been the work highlight/lowlight from the past week?” be prepared to answer that question, too.

Some one-on-one questions you can add to your next meeting include:

Being vulnerable with your team is a great way to continue to build trust with each individual. It also builds a supportive team culture, which will help propel the team forward.

Hiba Amin is the Content Marketing Manager at Soapbox, a meeting software that’s used by over 100,000 managers and their teams. You can find Hiba on Twitter. 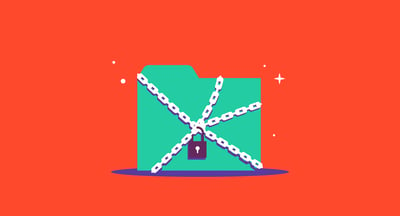 What Is Vulnerability Management? Get the Answers You Need

Modern businesses share a digital space with one another and the internet, so the possibility... 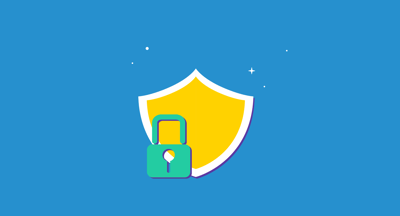 Cyber threats are a mirror of security gaps, and you should always cover them before they get... 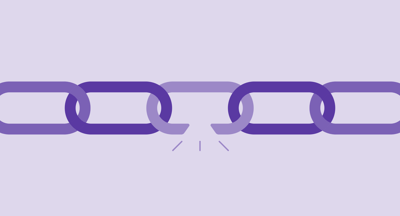 What Is Zero-Day Vulnerability? A Threat You Need to Be Aware Of

What Is Vulnerability Management? Get the Answers You Need

Modern businesses share a digital space with one another and the internet, so the possibility...

Cyber threats are a mirror of security gaps, and you should always cover them before they get...