There are over 5 million apps in the Google Play Store and Apple App Store combined. How many are built for Android, iPhone, or both? More importantly, why are apps built the way they are?

What is cross-platform mobile development?

With cross-platform mobile development, programmers can develop apps for multiple mobile operating systems simultaneously. Developers essentially use the same codebase for different platforms. While there are still use cases for Android and iOS app development,  a cross-platform mobile application can be used on both an Android phone and an iPhone.

How do I make a cross-platform app?

There are obvious advantages when developing a cross-platform app, but there are also a few downfalls to this development method. It’s important to understand the full scope of the project to know if it’s right for you. 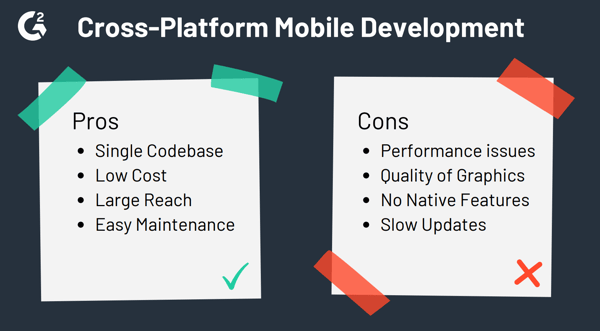 What is the best programming language for cross-platform?

Cross-platform development can be done successfully in a variety of different languages. The most popular choices are usually general-purpose languages like Java and C++. Javascript is also commonly used when paired with HTML5.

As discussed earlier, mobile apps are typically created for a specific platform, such as Android or iOS. Furthermore, developers use different mobile development platform software. In short, the platform dictates the toolbox. If your app is developed specifically for iOS, you will most likely use Xcode. Apps for Android are usually built in Android Studio.

Because cross-platform development allows programmers to write one set of code, it requires its own set of tools. Keep in mind, some of these tools are meant to be used with specific programming languages, so that could affect your decision on which tool to use.

Here are a few of those helpful tools to get you started:

Xamarin is used to develop iOS, Android, Mac, and Windows applications in the C# programming language.

“Writing cross-platform code for phones using C# is incredible. You get the benefits of the C# community as well as using Visual Studio which has an excellent debugging experience. Debugging an application running on a live device in Visual Studio is a very good experience. The community has a healthy number of contributions and there are many solved problems to choose from.” - Xamarin Review by John B.

“Obviously, what I like best is the fact we can build for different mobile OS (currently, we develop for Android and iOS) by means of web application programming (HTML and Javascript). Cordova has an excellent set of basic APIs, and it's also good that there is a huge number of plugins available for many features not included in the main API.” - Apache Cordova Review by Rut B.

PhoneGap is an open-source development framework that uses HTML, CSS, and Javascript.

“It is an easy tool, you can configure it and run it very easily to start coding. It is not necessary to know different languages for every device you will deploy your app into and the online documentation and support is very huge.” - PhoneGap Review by Rafael R.

Use the right tools for the job

Cross-platform mobile development can be a great option for your app! No matter the preferred programming language, there are tools to help you throughout the process.

The development process isn’t just the technical stuff. Learn how to make sure you have a killer app design.