Over the past few years, the topic of company culture has been extremely popular.

There have been a ton of a lot of experts writing about how to implement or improve company culture at your company to the point where it’s almost become a buzzword.

But let me tell you a secret…company culture has always been important.

What makes a great company culture?

The rest of the world just seems to be waking up to its importance because they are struggling to fill open positions at an alarming rate. The current job market is 90% candidate-driven, which means jobseekers hold all the power and can pick which companies they want to work for. Not just be thankful to have a job.

That means that companies are starting to invest more in flashy perks and trendy offices to tip the scales in their favor a bit. We teamed up with Glassdoor and MIT to analyze over 1 million company reviews from 500 of the biggest brands in the world to find out what actually influences great company culture.

Turns out, flashy perks might not be all that. We found that beer on tap, free lunches, and ping pong tables can only improve your company culture to a point. In fact, traditional things like great benefits, strong leaders and a solid work/life balance actually lead to the best company culture.

Not sure if you agree? Let’s take a look at what the data says.

1. Great leadership at all levels

For a company to truly have great company culture and branding, there needs to be strong leaders and managers at the top. These are the people that are most visible in the company, and will be able to impact the company culture the most, and shape what your company may look like going forward.

They may have even started a program or process that forever changed the way employees feel about the company culture in a positive, neutral, or negative way.

So to back this claim up, I decided to look at every CEO approval rate for the companies in this study: 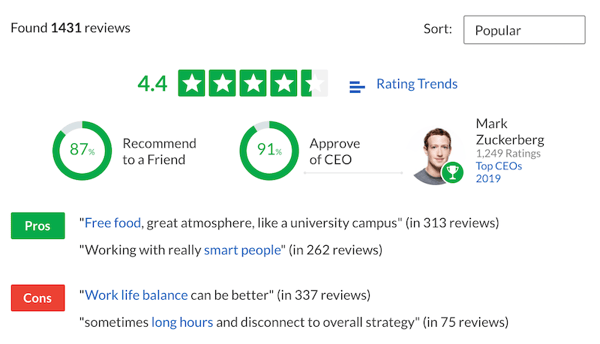 For example, 91% of the employees from Facebook approve of Mark Zuckerberg as their CEO. If you were wondering, the average approval rate for the sample was 83%.

To make analysis a little easier, I broke the companies into simple groups based on their score. As you can see in the graph below, the brands that had a 90-99% CEO approval rating also had the highest average Culture & Values ratings: 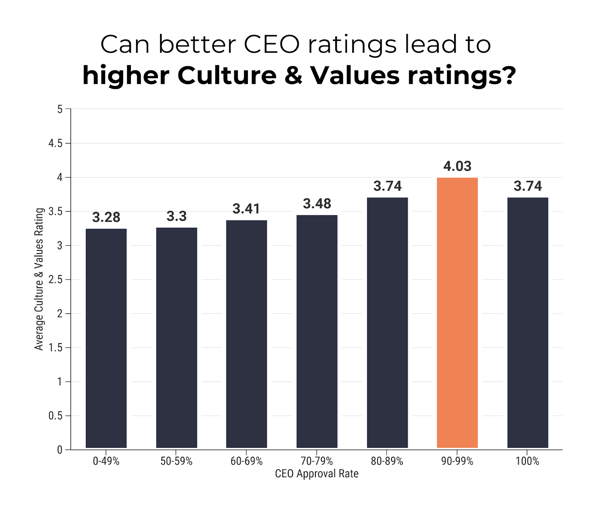 Not only does this confirm that a great CEO leads to better company culture, but it also shows that a bad one can tank your culture. Actually, the companies in the lowest review group actually had Culture & Values scores that were 20% lower than the highest group.

Next, let’s take a look at the data from Senior Management reviews. These high-level employees might actually have more of an impact on company culture than the CEO. The CEOs have the power to make sweeping changes or rules, but employees are the ones that have to put it into practice.

This includes directors, managers and other leaders that work with employees on a day-to-day basis. So let’s take a look at what the data actually says. 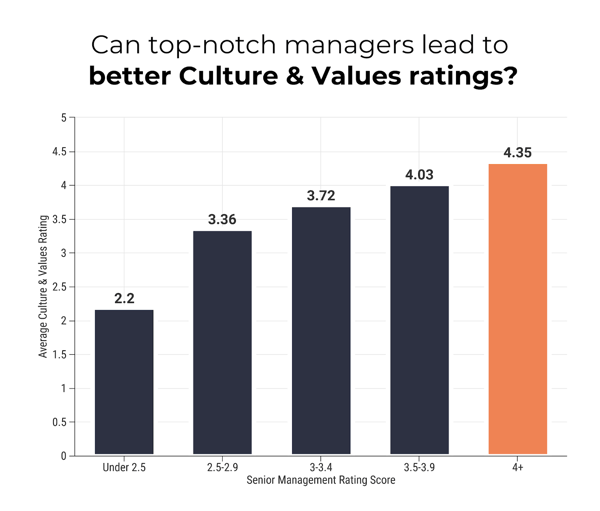 The massive gap between the best, average and terrible managers wasn’t very surprising. These directors, managers, and leaders in your company interact with employees on a more regular basis.

You might not have ever even spoken to your CEO outside of a few pleasantries. At the same rate, someone might really admire their CEO but dislike their direct manager or director.

As mentioned above, many companies have been using interesting or unique perks to stand out to jobseekers. Frequently, these brands are showing off nap pods, catered meals, gym memberships, and more on social media.

These are all great if you want to get people in the door and be excited about working for your company. I know I would have wanted to work at a company that allowed something as fun as office dogs!

But to keep them engaged and happy in the long term, you really need to match those trendy perks with valuable long-term benefits, especially because the cost of healthcare and retirement continue to trend upward at an alarming pace. 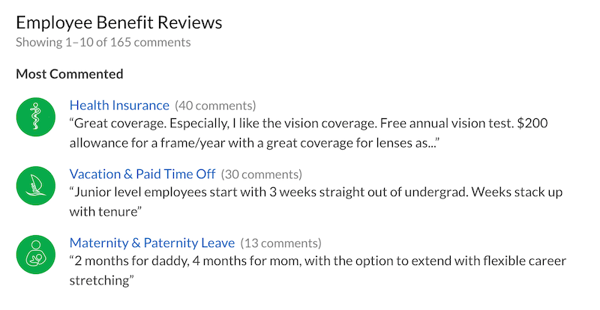 I was a little hesitant to use this type of data at first because it felt too simplistic. But I also realized that when someone reviews a benefit, even negatively, it still means they really care about it. Now, when we crunched the data we found that health insurance and a 401(k) plan were the most referenced across all of the reviews. 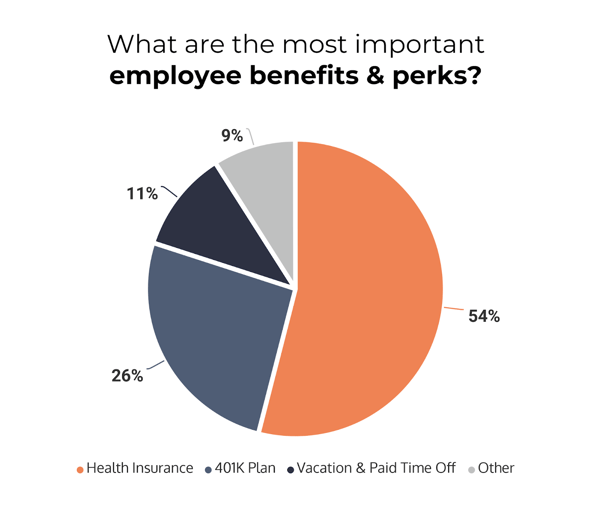 These the very definition of traditional benefits. At the end of the day, people just want to be healthy and able to retire.

The graph below actually shows how many times the top benefits were mentioned across all companies in our study: 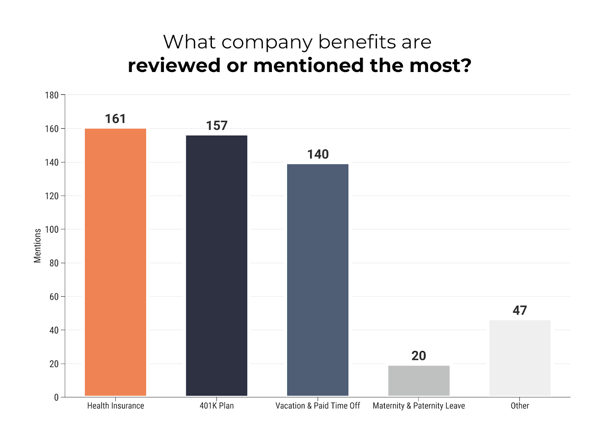 This shows that statistically speaking, about 90% of the companies had Health Insurance and 401(k) plan in taking one of the top review spots.

Until I did this study, I truly believed that companies that paid their employees a lot were just trying to cover for their poor company culture. It makes sense when you think about it. Instead of investing in improving company culture or the working environment, they just paid people a lot more.

As the most glorious Wu-Tang Clan said, “Cash rules everything around me”. But Biggie also claimed, “Mo money, mo problems”. So when it comes to company culture, which one is it?

Imagine my surprise when I actually found that brands that pay slightly above average actually have the best company culture: 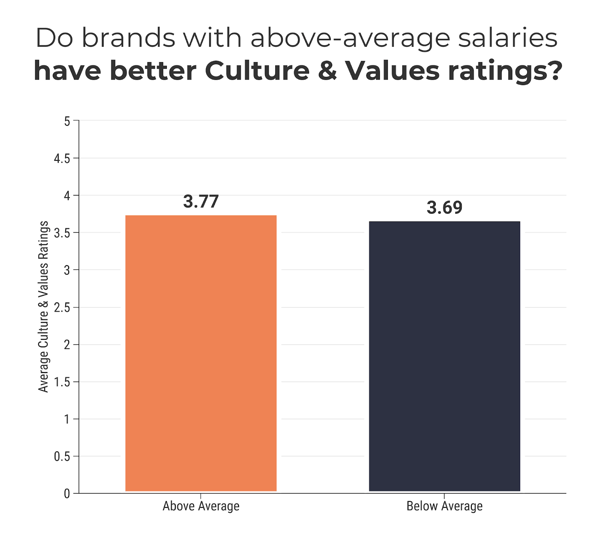 I found this by looking at the reviewed salary and average salary range for each of the 20 most reviewed positions. 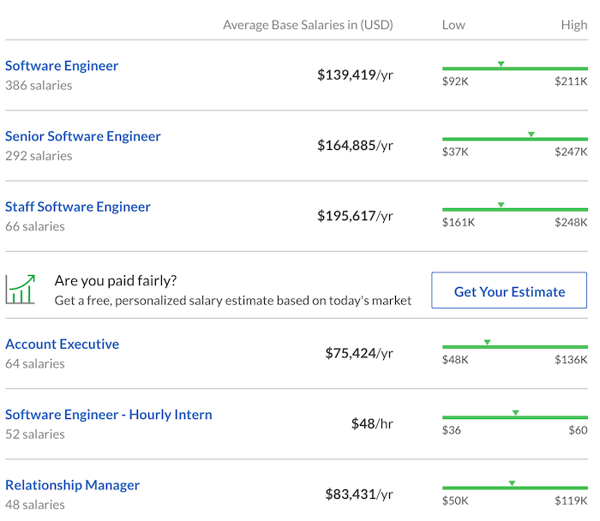 Because I’m obsessed with data, I had to figure out what percent above average actually led to the highest Culture & Values ratings:

As you can clearly see, it really only takes paying your employees about 7% higher across the board to maximize your company culture, which is surprising.

That said, I wouldn’t recommend trying to improve your company culture with a simple salary increases. But it doesn’t hurt. So instead of renting an office in the trendiest part of town, maybe just give your employees a pay bump.

Putting it lightly, there’s a lot of room for improvement.  Being able to walk away from your work at the end of the day or week has become almost impossible now, especially if you work for a high growth brand or tech company like Venngage. I will admit that I never really check out, and I will answer an email or Slack message at all hours.

Thankfully, companies are starting to realize how costly and dangerous burnout can be to their employees. Currently, it costs the economy about $190 billion in healthcare expenses and lost productivity.

Poor work/life balance can also massively hurt your company culture, which makes a lot of sense.

See how the entire team at G2 took part in #WFHWeek (work from home) this summer and how it benefitted their mental health, commute time, sleep, and more!

As you can see in the graph below, the companies that had high Work/Life Balance scores also received the highest Culture & Values scores as well: 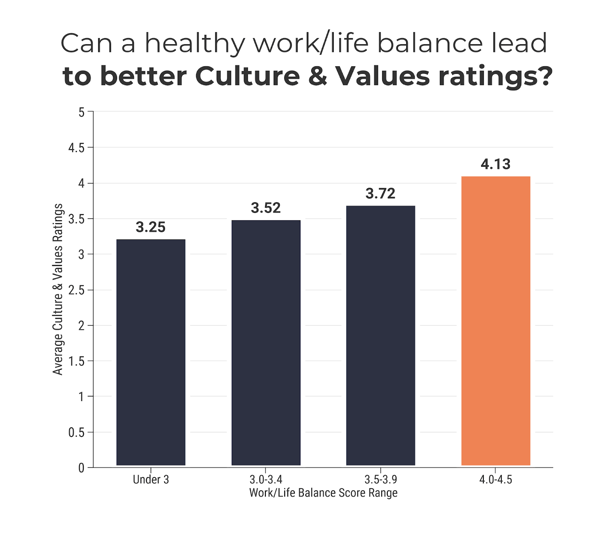 Compared to the other sections there was a rather large gap between the top scores and the second best scores.

Clocking in at 11% over the next range and 28% higher than the lowest review range, showing that a healthy Work/Life balance is a core component of company culture.

I also discovered another interesting trend while researching this section. As Work/Life Balance scores increase, employees have a more positive outlook for the future of their company. 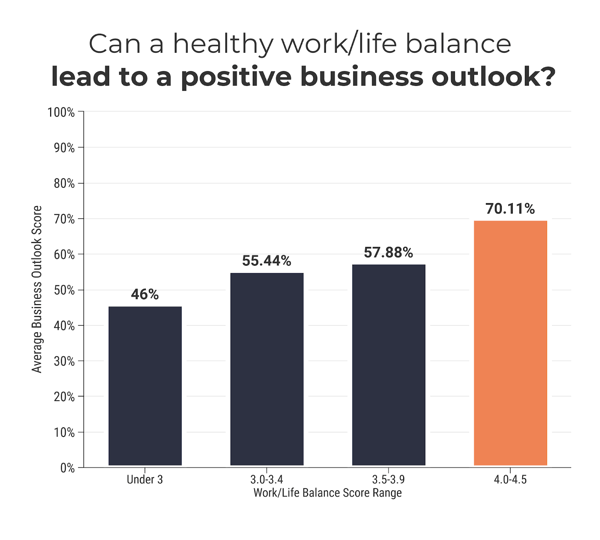 Again this makes a lot of sense, but it also illustrates how impactful great company culture and a healthy work-life balance is.

Now if you would like to see us bust 8 common company culture myths, be sure to check out the full study – a shortened infographic version can be seen below!

For this article, we leveraged over 10,000 individual data points from Glassdoor company reviews over the last month.

We also used Culture 500, a groundbreaking and first-ever online interactive tool from MIT Sloan Management Review (MIT SMR) and Glassdoor that scientifically ranks and compares the corporate cultures of more than 500 of the most powerful companies driving the U.S. economy.

The Culture 500 analyzed data from 1.2 million employee reviews from around 500 of the largest companies in the world. Then, using MIT’s world-class natural language processing, they evaluated all of those reviews.

I used that massive collection as a starting point to narrow my data set to 175 diverse companies from all over the world. These companies were selected because they received scores in each of those nine values of company culture. Otherwise, comparing companies with missing data points could get messy! 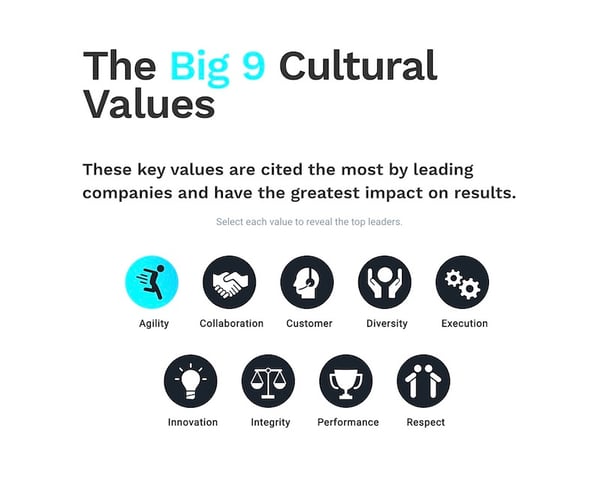 As you can see in the image above, those cultural values include Agility, Collaboration, Customer, Diversity, Execution, Innovation, Integrity, Performance, and Respect.

Using the Culture 500 tool, researchers at MIT were able to rank each company based on the 9 values of company culture. Each company also received a standard deviation score based on how their review score compared to the rest of the companies for that cultural value. 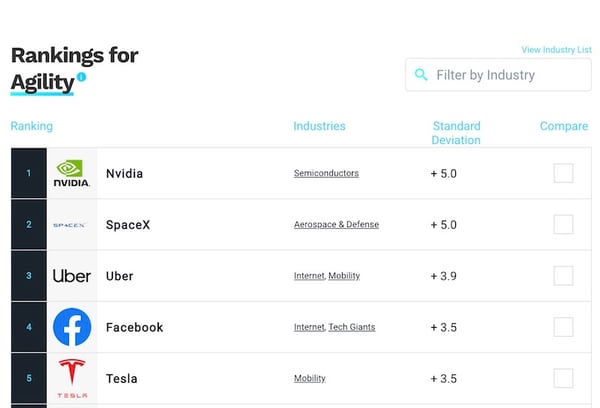 To make comparisons easy across the different values, I decided to focus on and analyze the standard deviation score for each company. For example, Nvidia would get a 5 for Agility, Tesla a 3.5, and so on.

This is also how Glassdoor and MIT analyzed each industry or group in their original study. After collecting all the data I could from the Culture 500, I did the same thing for each of the 175 Glassdoor profiles I’d selected.

Glassdoor company profiles have data on salaries, interviews, company culture, CEO approval rates, and basically anything you want to know about a company.

The secret to success

There isn't a magic formula to cultivating great company culture, but implementing the four things above can surely help your company's overall culture flourish and bloom.

So, while you're thinking about making your overall company have a better culture fit, learn how to build a culture that works together well. Remember, collaboration is key. See exactly how to build a collaborative culture with our free downloadable infographic! 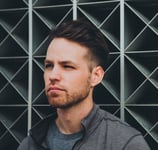 Ryan McCready went to the University of Arkansas and graduated with a degree in economics and international business. Now instead of studying the economy, he writes about design, marketing, and more. 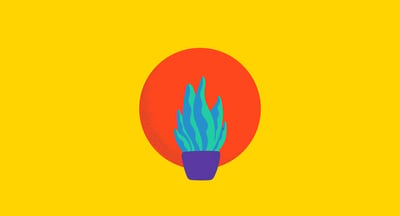 How to Build Strong Company Culture in a Modern Workplace

When you think about the elements that are most important to your business, what comes to mind? 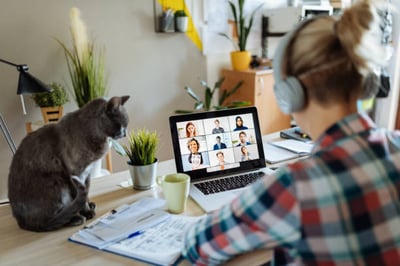 How to Build and Maintain an Empowering Collaborative Culture

We've seen it all: from stylish Instagram stories and colorful offices to branded totes. 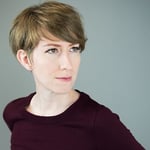 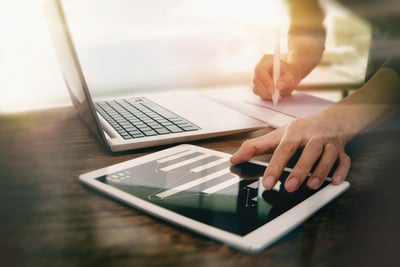 The rise in data-driven marketing is unmistakably visible in recent years. 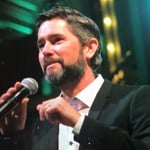 How to Build Strong Company Culture in a Modern Workplace

When you think about the elements that are most important to your business, what comes to mind?

How to Build and Maintain an Empowering Collaborative Culture

We've seen it all: from stylish Instagram stories and colorful offices to branded totes.