Whether it’s the equipment used at desks or the software used to communicate, very few things look the same as they once were.

Something else that is completely different is how much data we have at our fingertips. What was once scarce is now a seemingly overwhelming amount of data. But, it’s only overwhelming if you don’t know how to analyze your business’s data to find true and insightful meaning.

So, how do you go from point A, having a vast amount of data, to point B, being able to accurately interpret that data? It all comes down to using the right methods for statistical analysis, which is how we process and collect samples of data to uncover patterns and trends.

For this analysis, there are five to choose from: mean, standard deviation, regression, hypothesis testing, and sample size determination.

The 5 methods for performing statistical analysis

There’s no denying that the world is becoming obsessed with big data, no matter if you’re a data scientist or not. Because of this, you need to know where to start. These five methods are basic, yet effective, in coming to accurate data-driven conclusions.

The first method that’s used to perform the statistical analysis is mean, which is more commonly referred to as the average. When you’re looking to calculate the mean, you add up a list of numbers and then divide that number by the items on the list.

When this method is used it allows for determining the overall trend of a data set, as well as the ability to obtain a fast and concise view of the data. Users of this method also benefit from the simplistic and quick calculation.

The statistical mean is coming up with the central point of the data that’s being processed. The result is referred to as the mean of the data provided. In real life, people typically use mean to in regards to research, academics, and sports. Think of how many times a player’s batting average is discussed in baseball; that’s their mean.

How to find the mean

To find the mean of your data, you would first add the numbers together, and then divide the sum by how many numbers are within the dataset or list.

Then, divide by how many numbers in the list (3).

When using mean is great, it’s not recommended as a standalone statistical analysis method. This is because doing so can potentially ruin the complete efforts behind the calculation, seeing as it is also related to the mode (the value that occurs most often) and median (the middle) in some data sets.

When you’re dealing with a large number of data points with either a high number of outliers (a data point that differs significantly from others) or an inaccurate distribution of data, the mean doesn’t give the most accurate results in statistical analytics for a specific decision.

Standard deviation is a method of statistical analysis that measures the spread of data around the mean.

When you’re dealing with a high standard deviation, this points to data that’s spread widely from the mean. Similarly, a low deviation shows that most data is in line with the mean and can also be called the expected value of a set.

Standard deviation is mainly used when you need to determine the dispersion of data points (whether or not they’re clustered).

Learn more: Clustering is a data mining technique that groups large quantities of data together based on their similarities.

How to find the standard deviation

The formula to calculate the standard deviation is:

To find the standard deviation:

On a similar note to the downside of using mean, the standard deviation can be misleading when used as the only method in your statistical analysis.

As an example, if the data you’re working with has too many outliers or a strange pattern like a non-normal curve, then standard deviation won’t provide the necessary information to make an informed decision.

It can also be explained by how one variable affects another, or changes in a variable that trigger changes in another, essentially cause and effect. It implies that the outcome is dependent on one or more variables.

The line used in regression analysis graphs and charts signify whether the relationships between the variables are strong or weak, in addition to showing trends over a specific amount of time. 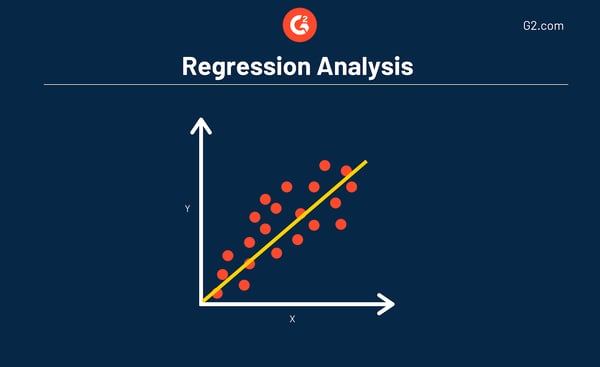 The regression formula that’s used to see how data could look in the future is:

One disadvantage of using regression as part of your statistical analysis is that regression isn’t very distinctive, meaning that although the outliers on a scatter plot (or regression analysis graph) are important, so are the reasons as to why they’re outliers. This reason could be anything from an error in analysis to data being inappropriately scaled.

A data point that is marked as an outlier can represent many things, such as your highest selling product. The regression line entices you to ignore these outliers and only see the trends in data.

In statistical analysis, hypothesis testing, also known as “T Testing”, is a key to testing the two sets of random variables within the data set.

This method is all about testing if a certain argument or conclusion is true for the data set. It allows for comparing the data against various hypotheses and assumptions. It can also assist in forecasting how decisions made could affect the business.

When you conduct hypothesis testing, the results of the test are significant to statistics if the results are proof that it couldn’t have happened by a random occurrence or chance.

The results of a statistical hypothesis test need to be interpreted to make a specific claim, which is referred to as the p-value.

Let's say what you’re looking to determine has a 50% chance of being correct.

The formula for this hypothesis test is:

Hypothesis testing can sometimes be clouded and skewed by common errors, like the placebo effect. This occurs when statistical analysts conducting the test falsely expect a certain result and then see that result, no matter the circumstances.

There’s also the likelihood of being skewed by the Hawthorne effect, otherwise known as the observer effect. This happens when participants being analyzed skew the results because they know they’re being studied.

When it comes to analyzing data for statistical analysis, sometimes the dataset is simply too large, making it difficult to collect accurate data for each element of the dataset. When this is the case, most go the route of analyzing a sample size, or smaller size, of data, which is called sample size determination.

To do this correctly, you’ll need to determine the right size of the sample to be accurate. If the sample size is too small, you won’t have valid results at the end of your analysis.

To come to this conclusion, you'll use one of the many data sampling methods. You could do this by sending out a survey to your customers, and then use the simple random sampling method to choose the customer data to be analyzed at random.

On the other hand, a sample size that is too large can result in wasted time and money. To determine the sample size, you may examine aspects like cost, time, or the convenience of collecting data.

Unlike the other four statistical analysis methods, there isn’t one hard-and-fast formula to use to find the sample size.

However, there are some general tips to keep in mind when determining a sample size:

As you analyze a new and untested variable of data within this method, you’ll need to rely on certain assumptions. Doing so could result in a completely inaccurate assumption. If this error occurs during this statistical analysis method, it can negatively affect the rest of your data analysis.

These errors are called sampling errors and are measured by a confidence interval. For instance, if you state that your results are at a 90% confidence level, it means if you were to perform the same analysis again and again, 90% of the time your results will be the same.

A method to the madness

No matter which method of statistical analysis you choose, make sure to take special note of each potential downside, as well as their unique formula.

Of course, there’s no gold standard or right or wrong method to use. It’s going to depend on the type of data you’ve collected, as well as the insights you’re looking to have as an end result.

Interested in finding the right tool to take your look into data even further? Check out our roundup of the best statistical analysis software for even the most complex analyses. 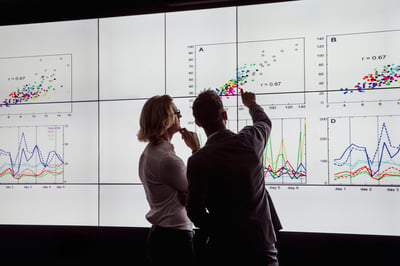 5 Steps of the Data Analysis Process

Businesses generate and store tons of data every single day, but what happens with this data... 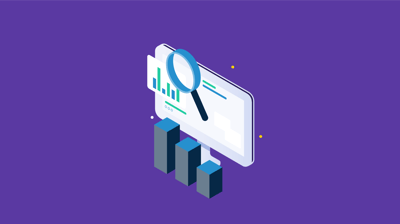 If your business isn’t taking a closer look at its data, there’s a whole world of...

If your business isn’t taking a closer look at its data, there’s a whole world of...