What happens when following the rules goes horribly, horribly wrong?

I’ve spent the last month covering the various types of corporate compliance, the varying industries and rules required for each one. Compliance is tedious and often very technical work that requires following rules and regulations down to the finest details. And while it may not be the most interesting or flashy topic, it’s required for businesses to operate within the law.

But there’s something lurking under the surface of this well-oiled machine called compliance.

What is malicious compliance?

Chances are you’ve witnessed malicious compliance before and just weren’t aware of what it was called.

Have you ever seen a coworker get away with something outrageous because they weren’t technically breaking the rules? Or maybe, much to your delight, you watched a colleague use the system against a terrible manager that you despised.

If you answered yes to either of those, chances are you’ve already encountered malicious compliance.

Malicious compliance is the act of intentionally inflicting harm by strictly following orders, rules, or policies with the knowledge that compliance with the policy will not have the intended result.

While malicious compliance can be used in any aspect of your day-to-day life, it's most often seen as an act of rebellion by employees who find a company policy too restrictive or flat-out stupid. The key to malicious compliance, as opposed to insubordination, is that an employee uses a company’s policy against them by following it to the letter.

Sound harsh? It might be. But people from all over the world have found comfort in the retelling of tales when fellow employees got their revenge on a particularly strict boss or company. The popular subreddit dedicated exclusively to sharing stories of malicious compliance has more than 850,000 members and is growing by the day.

Related: Are you up to date with the ins and outs of software compliance? Make sure you're staying in your lane while online.

In order to give you a clear picture of how horribly wrong compliance can go, we’ve scoured Reddit to find the best examples of malicious compliance.

Some of the examples below have been edited for readability or length in this article. You can find the full, unedited version of each by clicking through the link in each title.

“I worked in an electricity retailer call center. It was highly unionised, but the management tracked login times to the minute.

One incredibly ridiculous thing they did was if you were a minute or two late, they would literally dock your pay by that many minutes. It wasn’t really enough for us to notice, and I’m sure they didn’t actually save any money - I mean, if you were 15 minutes late I could understand not paying but 3 minutes late?

Well, eventually the union discovered what they were doing, and were angry that they hadn’t been consulted. This is where the malicious compliance comes in.

The union demanded log-on and log-off times for everyone in the call center. What management hadn’t counted on was that all of us would often need to wrap up calls and clear the call queue before the call center could officially close. This often meant that operators would leave several minutes after their shift. On bad occasions it could be 15-20 minutes delay before they could clock off, but mostly it was only a few minutes.

The union made management recalculate everyone’s pay for the year based on clock on and clock off time. They also pointed out that staying past end of shift triggered penalty rates. It turns out everyone (and I mean everyone!) had spent more time wrapping up calls at the end of the day than they were late clocking on. Each of us got paid for lost wages, at overtime rates.

It cost them a fortune and they never docked the pay of anyone who was late ever again.”

2. Company says I tip too high when I travel. Now, I intentionally order more expensive food so I can tip what I think is an appropriate amount.

“When going over my expense report my company saw I tipped 20% for lunch one afternoon. Lunch was $15, the tip was $3. They told me that is too much “because I wouldn't do that with my money." Heck yeah, I do. I just took the better part of an hour of my servers time. The least I could do is leave $3. It's $3 for crying out loud, but rules are rules.

However, my company is fairly generous allowing me $75 a day to spend on food, which I never do and that's about to change. For lunch today instead of my usual salad or sandwich, I went for the lobster grilled cheese. And of course upgraded my regular fries to the duck fat fries. Enjoy "saving" that 5% for the rest of my travel meal expenses.”

3. Restaurant employee amuses himself, delights me and my kids

“Yesterday I decided to take my kids to an international chain restaurant. In this restaurant, the kids' meal comes with ice cream. But, you have to serve yourself.

That was a problem because there weren't any bowls beside the ice cream machine.

So, I thought, "I know what to do. I'll simply ask an employee for some bowls." And that's just what I did.

He turns to look at the vast array of bowls behind him, some sauce-sized, some entree salad-sized, and many in between. And we realize that neither of us knows what size the kids' ice cream is intended to be.

So he thought, "I know what to do. I'll simply ask a manager."

Without turning around, the boss says "A bowl, what do you think?"

The employee says, "Yeah, but what size bowl?"

The boss, with his inimitable charm, tact, and grace, says "JUST GIVE HIM A BOWL."

The employee looked back at the bowls, and then I saw him get a big grin over his face.

"I apologize about that, sir. I think it's probably these ones," he says, as he hands me two of the largest bowls they have in the restaurant, practically giggling with glee.

My children were similarly delighted.

The manager walked by when we were half way through and made a noise like a startled opossum, but said no actual words.

Definitely going back there.”

“I work for an office and we have an 8 week busy season with mandatory overtime (12-14hrs/day). During this time, the company agrees to reimburse us for dinner, up to $13 per meal. We just have to submit a claim with receipts at the end of the busy season.

The food options around my work aren't great, so I usually brought my dinner from home. But sometimes I was too tired to cook after a long day so out of the 8 weeks, I purchased maybe 10 meals. For three of those meals I spent $13.50, going $0.50 over the limit. This resulted in a whopping $1.50 overage which my manager said it was no big deal and that I could include on my expense claim. He signed off on it and everything.

A few days after I submitted my report, Head Office emailed me saying they rejected my expense claim and that I could resubmit after I removed the $1.50 overage. I wrote back saying my manager was fine with the $1.50 overage and even signed off on it.

They responded by telling me that they do not allow overages under any circumstances, and that the $1.50 must be removed or they wouldn't approve any of my meal expenses. They ended their email with the advice that I should ‘actually read the company policy next time.’

Fine, they were right and I was wrong. So I decided I'd read the policy very thoroughly before redoing my expense claim.

Yes, the policy clearly stated a $13/maximum on purchased meals. Oh, and what's this? The policy also allows a $10 per diem for meals you bring from home. I very happily removed the $1.50 overage and added an additional $300 for the 30 meals I brought from home. I should read the company policy more often!”

How can a company prevent malicious compliance?

So, how can you help prevent malicious compliance in the workplace?

1. Listen to your employees

The tipping point for nearly every malicious compliance story is a disregard for employee concerns. When your employees feel as though they can’t communicate with leadership, they are more likely to take matters into their own hands.

If an employee comes to you with a concern or raises questions about a certain policy, don’t just write them off. Sit down, listen to understand, and work with them to ensure a compromise that benefits everyone can be met.

There are some compliance issues that cannot be avoided. You can’t ignore regulatory compliance and break the law. The mistake many companies make is creating arbitrary rules and regulations that impact employees negatively, while not actually benefiting the company overall.

Employees are sick of red tape. It prevents them from doing their jobs and it often leads to frustration, burnout, and employee turnover. That’s what you should choose which company policies are worth putting up a fight for and which ones don’t actually serve a greater purpose.

At the end of the day, you shouldn’t be creating company policy for the sake of it. Using rules and regulations to control your employees is a recipe for disaster. Yes, there are some company policies that are necessary to have. But ruthlessly punishing your employees for being one minute late or missing a day of work for being sick will get you nowhere.

Trust that your employees want to do well at work. Don’t assume everyone is trying to cheat the system. And treat everyone as an individual with personalized needs. When you put the human back into human resources, you’ll be surprised by the outcome.

The issue isn’t with your employees

It’s with your compliance program. Malicious compliance is a symptom of a larger problem. If your employees feel this frustrated by your current regulations then it might be time to switch your approach and take a deeper dive into HR compliance.

Lauren is a Content Marketing Manager at G2. You can find her work featured on CNBC, Yahoo Finance, and on the G2 Learning Hub. In her free time, Lauren enjoys watching true crime shows and spending time in the Chicago karaoke scene. (she/her/hers)

What Is Corporate Compliance and How Does It Impact Business?

Don’t be complacent with your corporate compliance. 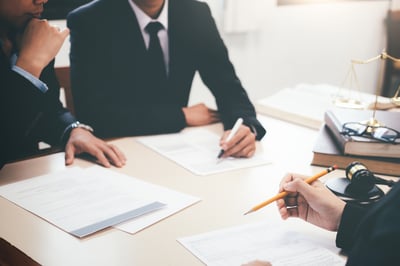 What Is FISMA Compliance and Who Does It Impact?

What Is Corporate Compliance and How Does It Impact Business?

Don’t be complacent with your corporate compliance.