Running a Discord server can be demanding.The potential consequences of leaving a channel unattended are worrisome (hint: worse than duck spam). In an ideal world, community members would behave themselves and nothing would go wrong while the heroic moderator left to eat dinner or sleep.

That’s where bots come in. Discord allows users to create bots to perform a variety of functions including sending out scheduled messages, issuing warnings, or even  playing music for the server.

How do you make a Discord bot?

Even without coding experience, creating a Discord bot isn’t as daunting as it sounds. Here’s a step-by-step guide to prove it.

If you don’t have a Discord account and a server already, head to discordapp.com and set yourself up. Once you have an account, click the + button on the left side of your home screen to add a server. 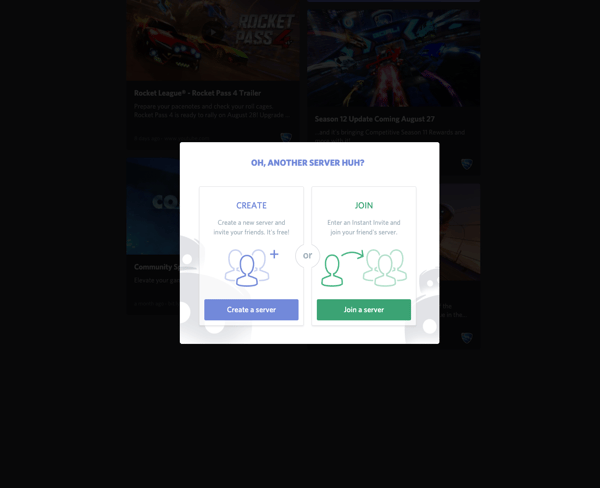 You’ll use JavaScript to build your bot, and you’ll need access to npm, a package manager for JavaScript.  While there are many ways to accomplish this, for our purposes we’ll use Node.js. Head to nodejs.org and install it. Lastly, make sure you have a text editor, the canvas for your code.

Okay, I’m pulling your leg. But, you will need an application on Discord to serve as the temporary shell of your bot.

Head over to your developer portal. Click New Application, then create a super cool name for your bot, like DuckWatch. Once you settle on a good name (allow up to three hours) click Create.

Pick an icon and description for your bot, then click the Bot button on the left side of the screen. From there, click Add Bot. 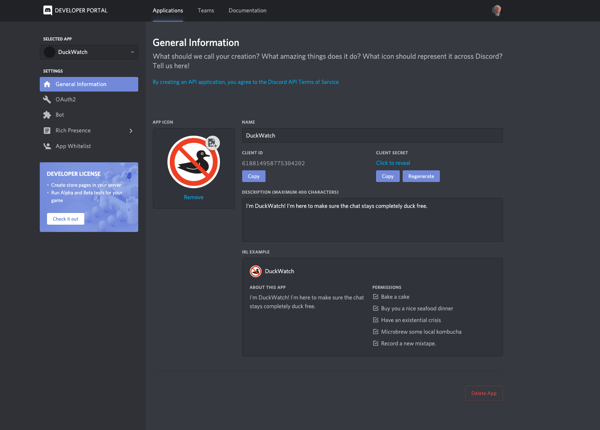 Get the bot’s token

For now, keep that token on hand.

Put your bot in your Discord server

From the developer portal, click OAuth2 on the left side of the screen. Under the Scopes header, select the box for Bot. Then click Copy just below that to grab the URL. 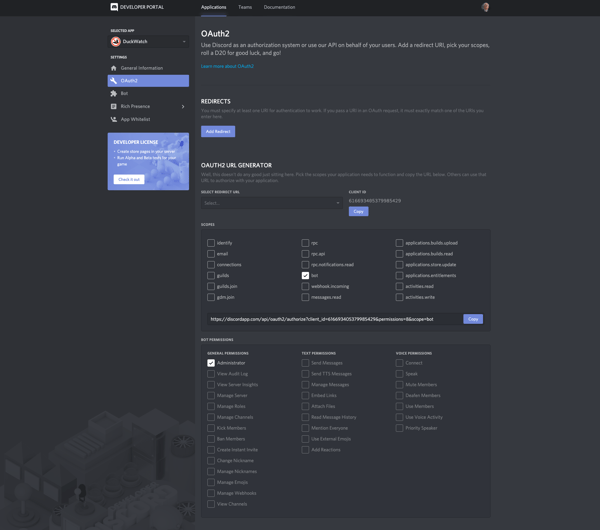 Paste the URL into a new tab or window to navigate there. From there, select your server and click Authorize. 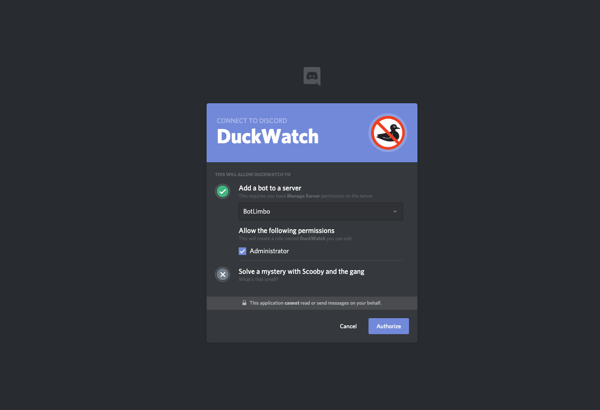 Your lifeless husk of a bot should now appear as a new user in your server. Hooray!

Make a folder for your bot’s code

You’ll want a folder for the text files that make your bot tick. Create one and give it a simple, memorable name. (Something like “DuckBot,” but more relevant to your bot’s functionality.)

Make your bot’s files with your text editor

“package.json” and “bot.js”  are a couple files that allow your Discord bot to operate correctly and provide relevant information about itself.

To create the first file, open your text editor and paste the following: 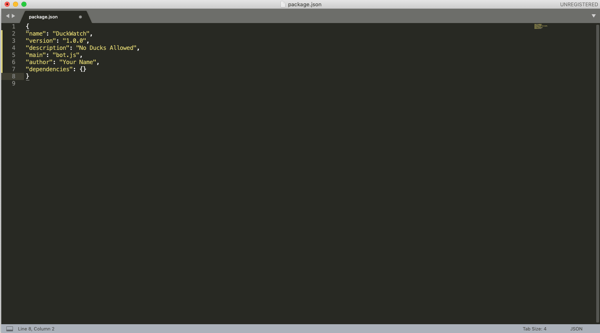 Feel free to replace “DuckWatch,” “No Ducks Allowed,” and “Your Name” with more relevant text. This file is for informational purposes, so you’ll want something that makes sense to you if you need it. Save this file as “package.json” and put it in your bot’s code folder. 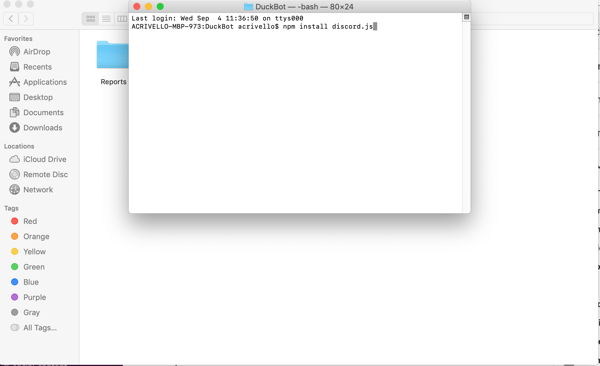 After pasting, hit Enter. This uses npm, to grant access to some necessary libraries your bot will reference in its code. You’ll see some new files pop up in your bot folder when this is complete.

Next, you’ll need the code that tells your bot what to do and when to do it. This step is a great reason to learn to code even if you’re not a developer. In this case you’ll want to learn more about JavaScript to give yourself deeper control over your bot’s behavior, but for now you can paste the following to give your bot some functionality (namely banning users for sending the message “ducks”). Below is some functional code for that purpose: 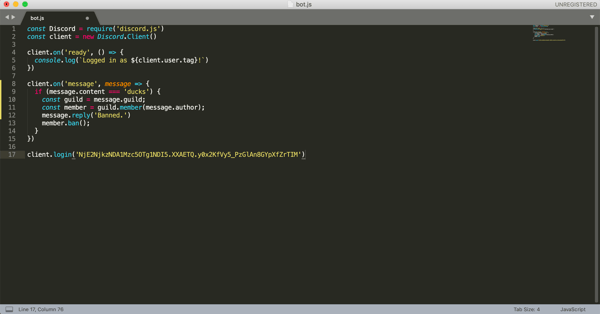 Save this file as “bot.js” in your Discord bot folder.

You’re all set! To run your bot, initialize your bot’s folder again (as described earlier) and type “node bot.js” in the command prompt or Terminal, followed by the Enter key. You should see your bot come online through Discord, at which point you can test it out! Hooray! 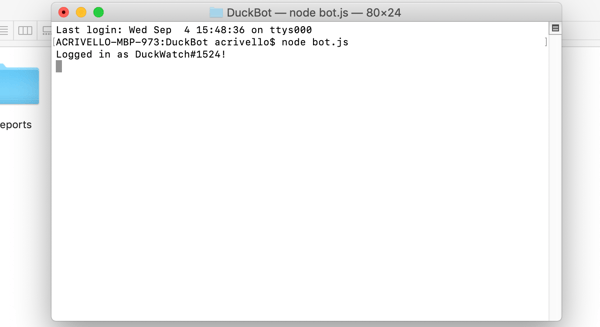 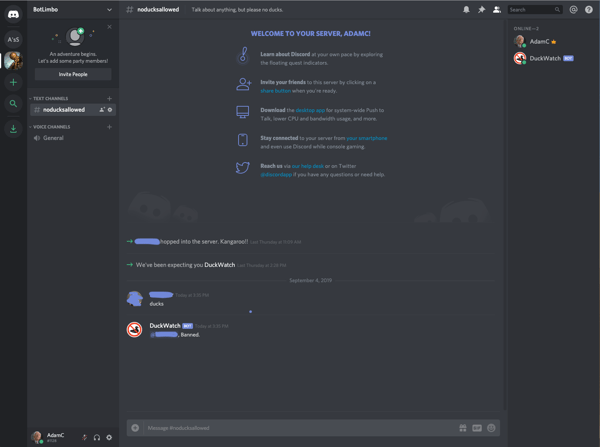 This guide has provided a solid foundation for building bots, but Discord bots can do much more than ban users for saying “ducks” if you’re willing to put in the research. They’re useful for sending automated messages at scheduled times, managing channel members, logging and documenting interactions for future review, and more.

Check out additional resources on how to create bots on various social networks and communities, including:

Adam is a research analyst focused on dev software. He started at G2 in July 2019 and leverages his background in comedy writing and coding to provide engaging, informative research content while building his software expertise. In his free time he enjoys cooking, playing video games, writing and performing comedy, and avoiding sports talk. 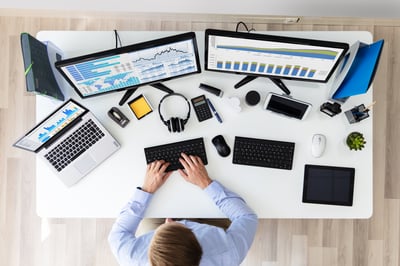 Whether it’s for work, fun, or research, creating charts and graphs in Google Sheets can add a... 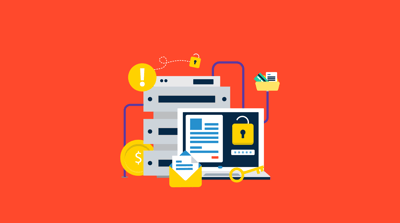 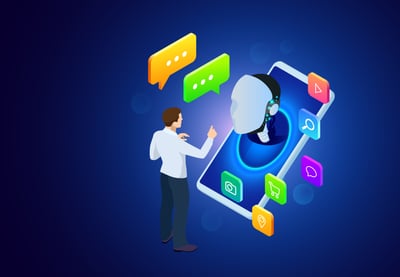 Use a Facebook Messenger Bot to Scale Your Business Today

Let's start off with a fun fact.

Whether it’s for work, fun, or research, creating charts and graphs in Google Sheets can add a...

Use a Facebook Messenger Bot to Scale Your Business Today

Let's start off with a fun fact.