Have you ever wondered how engineers and manufacturers test the durability, strength and safety of their designs?

If you’ve ever watched a car commercial, you might believe engineers and designers continually destroy their products to test for strength. You might conclude manufacturers repeat this process until the design can withstand a great amount of damage and it reaches an acceptable durability. Even though it costs companies millions to test and destroy their concepts, this is really the only way to prove a product’s durability, right?

The answer to that is yes and no. While engineers almost always test a product’s final design by having it interact with actual physical forces, engineers and manufacturers also use computer-aided engineering software to optimize strength and durability before actually testing it. The process of using software to test how a product reacts to real-world forces is called finite element analysis (FEA).

What is finite element analysis?

While finite element analysis contains a series of complex steps, it can be broken down to one goal.

Finite element analysis is the use of computer software to understand how objects interact with physical forces.

It’s important to understand that although computer-aided engineering software aids in testing reactions to physical forces, finite element analysis requires engineering knowledge. These are mathematical equations used by engineers to solve problems such as how to improve an object’s stress resistance.

But how do engineers test how an object will be affected by a physical force? They do what every engineer does: break down a big problem into a bunch of smaller, more manageable ones. The method of breaking down a problem is called finite element method.

The finite element method works by breaking down a large problem into a handful of smaller problems called “finite elements.” Using this method, engineers can test each element’s behavior using computer-aided engineering software. Once engineers test how elements react with physical forces, the computer can predict the behavior of the entire object. The finite element method is a mechanical engineer’s bread and butter and is used in a variety of cases to make accurate calculations.

While the finite element method might seem complex in theory, practical use cases make it much easier to understand.

A prime use case of the finite element method is testing the strength and durability of a bridge. When engineers design a bridge, aesthetics tend to get all the glory. As consumers and city dwellers, we tend to prioritize a piece of architecture’s visual appeal over its safety and durability. This is why one of the most famous bridges in the world is the beautiful Golden Gate Bridge in San Francisco. It’s an architectural masterpiece that at the time of its construction was the world’s longest single-span suspension bridge. It connected Marin County to the city of San Francisco and was visually appealing to boot. But how often do people think about how much planning it took to engineer such a large structure? How did engineers construct a bridge that has stood for more than 80 years with no computer software to help them? The answer lies in the finite element method.

Taking a closer look at the Golden Gate Bridge, one can appreciate all the different elements engineers had to account for. The bridge is effectively a bridge deck, pylons, cables, beams and foundation combined into a single object capable of supporting 887,000 tons.

Next, engineers had to test how this bridge would react to earthquakes and the heavy winds common to the Bay Area. The best way to do this was by breaking down how each element would react to physical forces to construct the entire bridge. For example, the truss system below the bridge was added to stiffen the deck and reduce the roadway’s tension on the bridge itself. Without it, the bridge would collapse. Engineers even placed shock absorbers at each end of the bridge to help it withstand seismic forces. Without the absorbers, the bridge could collapse in an earthquake. To think the engineers of the Golden Gate Bridge had to do all of this manually is mind-boggling, but what’s even more impressive is they accomplished all this in only four years — by relying on the finite element method.

Fast-forward to today; we have computer-aided engineering software that allows engineers to conduct finite element analysis before construction begins. While the engineers of old had to think about all these elements beforehand, engineers today can optimize and ensure the safety of their designs using software.

This is why constructing the Golden Gate Bridge would look a lot different today. With computer-aided engineering software, users can tinker with construction geometry to build structures that are durable and safe.

Once you’re done designing a structure or object, the software performs the finite element analysis. In the case of a bridge, this mostly involves direct stress that weight would have on the structure. The software can then identify which elements of the bridge would fail under certain stresses and whether the bridge itself would collapse. Using finite element analysis, engineers can quickly identify areas that need to be redesigned.

Why use finite element analysis?

There are a variety of ways in which finite element analysis can help engineers and manufacturers speed up  core functions of their day-to-day jobs. 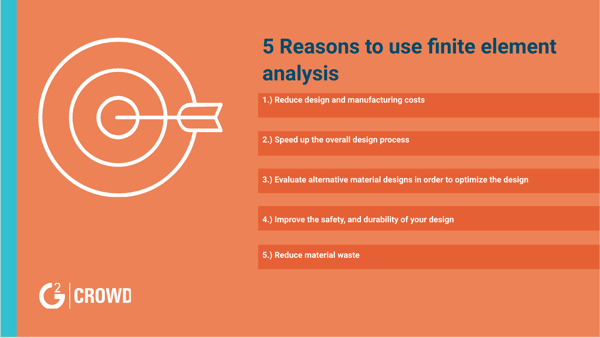 Finite element analysis drastically reduces manufacturing costs. Historically, engineers and manufacturers had to manually redesign objects over and over until the engineers were positive the final design would remain intact under physical stress. This required many redesigns, which would elongate the design process, costing lots of money. However, with finite element analysis, designers can test durability within the virtual space of computer-aided engineering software. This significantly reduces project lead times, which saves manufacturers money  and time while reducing material waste. The finished result is a safe and durable design.

Want to learn more about how software is helping engineers and architects? Check out our article on BIM.

Mike is a market research analyst focusing on CAD, PLM, and supply chain software. Since joining G2 in October 2018, Mike has grounded his work in the industrial and architectural design space by gaining market knowledge in building information modeling, computer-aided engineering and manufacturing, and product and machine design. Mike leverages his knowledge of the CAD market to accurately represent the space for buyers, build out new software categories on G2, and provide consumers with data-driven content and research. Mike is a Chicago native. In his spare time he enjoys going to improv shows, watching sports, and reading Wikipedia pages on virtually any subject.